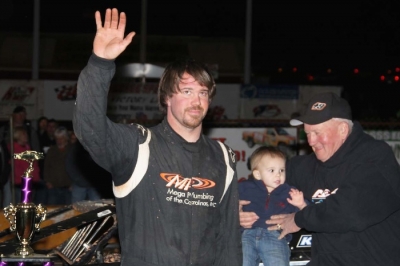 GAFFNEY, S.C. (March 2) — Jonathan Davenport, of Blairsville, Ga., jumped out to the lead on Sunday's opening lap of March Madness XXII at Cherokee Speedway and never looked back.

“This thing is just awesome when there is a little bit of grip in the racetrack,” Davenport said after driving the K&L Rumley Enterprises Longhorn Chassis to victory. “This Longhorn car, I just can’t say enough about it. It has just been really, really good.” | Video | Slideshow

Davenport’s only real threat came in the form of slower cars. A serious challenge from behind never materialized as he was able to keep a safe distance between himself and foes chasing from the runner-up spot in Cherokee’s traditional season opener.

Not known for his methodical driving, Davenport mixed in his classic hammer-down style with veteran driving prowess, leading all 60 laps for a $10,000 in the unsanctioned event.

Chasing him to the checkered flag was Steve Francis of Ashland, Ky. and Jason Hiett of Oxford, Ala., who earned $3,000 in Saturday’s weekend opener. Rounding out the top five was Chris Madden of Gray Court, S.C., and Brent Dixon of Elberton, Ga.

Davenport started outside of the front row alongside Don O’Neal, of Martinsville, Ind. After waving off the first start and resetting the field, the second start went off without a hitch and in just the first handful of laps Davenport had a half-straightaway lead.

Many yellows flew in the first 10 laps for single-car incidents. O’Neal’s night ended on the sixth lap as he retired his machine to the pits with smoke trailing behind it.

The most serious incident of the race came between Madden and Zack Mitchell of Enoree, S.C. As Madden made a move under Mitchell entering turn one, the slowing car of Anthony Sanders was in the low groove just ahead after his car broke a driveshaft. Madden tried to avoid Sanders and slid up into Mitchell, whose car was knocked into the wall, ending his night.

Notes: Davenport’s Longhorn Chassis has a Rumley-Clements powerplant and sponsorship from AES Racing and CV Racing Products. … Davenport became the first three-time March Madness winner, adding the victory to 2009 and ’11 triumphs. Jared Landers of Batesville, Ark. is the only other driver with multiple victories  (2012-13). … Davenport’s victory came the day after he finished second to Chris Madden at East Alabama Motor Speedway’s Bama Bash on the NDRL circuit. … Davenport notched his second victory of the season; his first came in Lucas Oil Late Model Dirt Series action last month at Golden Isles Speedway near Brunswick, Ga. … The event was unsanctioned but officiated by the crew that works Ray Cook’s Southern Nationals Series.  The start of the feature was delayed about an hour after the track was overwatered; officials invited four-wheelers to help pack the surface. ... A beautiful day greeted fans and competitors with sunny skies and afternoon temperatures in the 70s. ... Ross Bailes of Clover, S.C., won the SECA Crate Late Model feature. ... Cherokee's next Super Late Model special event is June 20 when the Lucas Oil Series invades for the $10,000-to-win Grassy Smith Memorial.