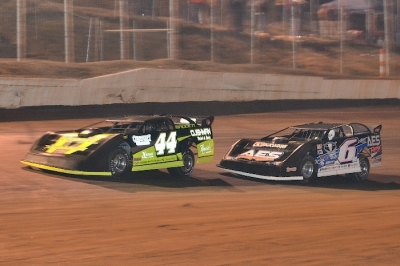 The third-starting Madden, who regained the lead on lap 55 when hometown driver Terrance Nowell had fuel pickup problems, led half the 75-lap feature while earning $17,017 in the first National Dirt Racing League points event of the season. | Video | Slideshow | Prelims

Davenport, of Blairsville, Ga., made slight contact with Madden exiting turn four on the final lap but finished just behind the winner after leading the first 28 laps. Clint Smith of Senoia, Ga., who started 20th, rallied to finish third followed by Scott Bloomquist of Mooresburg, Tenn., and Don O’Neal of Martinsville, Ind.

Nowell, who started 21st in the 25-car field, made a fourth-to-second move around Davenport and Chris Ferguson on lap 43, then grabbed the lead from Madden on lap 46. But his engine wasn’t getting fuel during a lap-55 caution for Ferguson’s flat right-rear tire and his car was pushed off the track; he finished four laps down in 18th.

On the next start, not everyone completed the opening lap as Fuller and Tony Jackson Jr. tangled in turn four. With the cars hooked together, a red flag was thrown to untangle them, and Jackson’s race was over.

On lap 29, Madden muscled past Davenport after making contact in turn four, shuffling Davenport back to the fourth spot with Bloomquist and McCreadie moving into second and third.

“I felt like at that point of the race, we had the best opportunity,” Madden said. “My car was rolling real free through the corner, and I didn’t feel like I was using any tire and was able to get up beside him and get the pass without taking a chance on burning my tires up.”

Said Davenport: “Madden thought, you know, I guess my pace wasn’t fast enough, so anyway, he got into us a little bit. But hey, that’s just racing in the rubber."

Several cars pitted to change tires when McCreadie slowed for his lap-39 flat, and Nowell soon broke into the top five with an eye on the lead.

During a caution period nine laps later for Ferguson, Nowell lost power because of fuel cell issues. That handed the lead back to Madden with Davenport in second and 20 laps remaining.

Nowell said his demise was caused by an apparent problem with a recently purchased car.

“The fuel cell, I believe there’s something in the fuel cell going wrong, maybe the pickup or something, just getting some air,” he said.

Smith, who pitted on lap 22 to change tires, took second from Davenport and began challenging for the lead as Bloomquist, who also made an earlier tire change, broke back into the top five.

With Madden still in control in the late stages, Davenport regained second from Smith and began turning up the heat on the leader. Davenport threw everything he could at Madden, who held on for his first victory on the second-year NDRL tour.

“We made a run at him there at the end,” Davenport said. “I felt like we saved our stuff good enough. I just didn’t quite time it right. I was about a car-length too late.”

Notes: Madden’s Bloomquist Race Car is powered by a Clements Automotive Engine and sponsored by Century Plastics, Henderson Amusements, Cushman Paint & Body, Hamrick’s of Gaffney, Ohlins Shocks, Hypercoils and VP Fuels. … Madden notched his second victory of the season; he won Feb. 7 in Lucas Oil Late Model Dirt Series action at Golden Isles Speedway near Brunswick, Ga. … Hometown driver William Thomas started the race with a brace on his left hand after having a growth removed recently; he retired after making one lap. ... Jimmy Mars drove Jason Krohn's backup car. ... The Bama Bash relocated to EAMS for its 17th edition after former home Green Valley Speedway closed last fall. .. More than 200 race cars entered among seven divisions for the weekend at EAMS. ... Montana Dudley of Phenix City, Ala., held off a hard-charging Josh Adkins of Talladega, Ala., for a $3,017 victory in the Crate Late Model portion of the program; Joe Armistead Jr. of Senoia, Ga., earned $3,017 in the Limited Late Model event. ... The NDRL returns to East Alabama Nov. 1-2 for the 40th annual National 100.