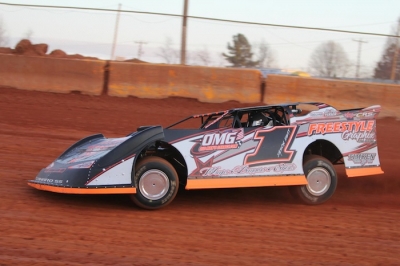 GAFFNEY, S.C. (March 1) — Starting on the outside of the front row, Jason Hiett of Oxford, Ala., outgunned polesitter Casey Roberts of Toccoa, Ga., for the lead at the drop of the green flag and held it for all 30 laps en route to a $3,000 victory in the opening event of Cherokee Speedway’s March Madness. | Slideshow

Roberts, who briefly took the lead from the 30-year-old Hiett on the third lap before the move was negated by the race’s first of two cautions, settled for second, while sixth-starting Brent Dixon of Elberton, Ga., eighth-starting Dale McDowell of Chickamauga, Ga., and seventh-starting Dennis Franklin of Gaffney rounded out the race’s top-five finishers.

This weekend’s pair of events at Cherokee are the first apart of Ray Cook’s Southern Nationals bonus races. March Madness action continues Sunday with another complete program paying $10,000 the winner. The drivers’ meeting is scheduled for 1 p.m. with hot laps to follow.