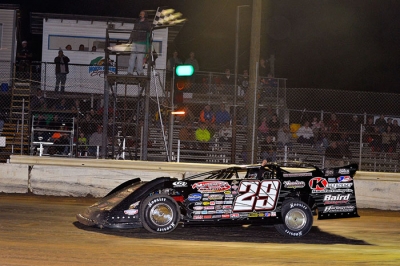 The 43-year-old driver from Union, Ky., switching to his own chassis for 2014 after many productive seasons in a Rocket Chassis, earned $5,000 Sunday evening in his Club 29 debut at North Florida Speedway at Georgia-Florida Speedweeks.

Lanigan overtook impressive home-state favorite Mark Whitener on the 28th of 40 laps and led the rest of the way against a modest 13-car field in the UMP Nationals, his second victory in as many years at the 3/8-mile oval.

“I’ll tell you what, you couldn’t ask for a better car,” Lanigan said, thanking crew members and fellow car designer Ronnie Stuckey in victory lane. "This Club 29 car was unbelievable, the first night out of the box, to come out that strong, it’s unbelievable.

“These guys have got something to look forward to this year, I think. All my (customers) out there, we’re going to work hard with 'em and see if we can’t get them in victory lane, too. I can thank my crew enough.”

Lanigan started on the pole, but Whitener made a nifty crossover move on the backstretch, swinging high through turns one and two and then under Lanigan heading down the backstretch. He firmly took control and built a comfortable lead in the first half of the 40-lap main event.

But as the laps wound down, the low-running Whitener couldn’t get off the corners as well while Lanigan, equipped with harder tires, drifted higher off the corners to built his winning momentum.

“He did a great job there,” Lanigan said of Whitener, who pulled alongside in victory lane with a thumbs-up sign for the winner. “I knew he was a little softer on rubber if we could just have a long green-flag run there, we’d be good. Everything worked out good.”

Lanigan swung around Whitener in turn four with 13 laps remaining and pulled away to win by more than a straightaway, lapping all but six competitors in the caution-free event.

Whitener settled for a second-place finisher to Lanigan — just like last February — while fast qualifier Brandon Cameron of Jacksonville, Fla., gave home-state drivers two spots among the top three. Jay Morris of Pittwood, Ill., and Tim McCreadie of Watertown, N.Y., rounded out the top five while Jeff Babcock of Wayne, Ohio, was the only other driver on the lead lap.

Notes: Lanigan’s Club 29 Race Car is powered by a Cornett Racing Engine and sponsored by Keyser Mfg, Xtreme Graphics, Baird Transport and Hoosier Tire. … Kevin Weaver was scheduled to started fifth, but he dropped to the pits during parade laps and missed the start. … Donnie Chappell suffered heavy nosepiece damage in his heat race and started the feature without it; he took a few laps in the feature and pulled out. … Most of the drivers will head to racing this week at East Bay Raceway Park in Gibsonton, Fla., or Bubba Raceway Park in Ocala, Fla., as Florida Speedweeks continue.

Second-heat winner Mark Whitener and runner-up Tim McCreadie had different views of their contact in turn three when Whitener took the lead. “I couldn’t get no further up beside of him,” Whitener said. “He was way up the racetrack.” McCreadie said he didn’t mind getting touched “but he touched and then he lays into you,” he said. “Hopefully we’re better in the feature. … Fast qualifier Brandon Cameron was surprised to be atop the timing charts. “I didn’t think we’d be in the top 10,” he said with a laugh. The Jacksonville, Fla., driver said a right-rear tire more than a year old was part of the reason he couldn’t keep up with Darrell Lanigan in the first heat. But the team bought new rubber to run in the feature event. … Jason Papich of Nipomo, Calif., dropped by North Florida to pick up some parts from chassis builder Darrell Lanigan, but he ended up staying to race in Lake City instead of continuing to East Bay Raceway Park to practice. “Lanigan talked me into it,” Papich said with a smile. Papich is running for Rookie of the Year honors on the Lucas Oil Late Model Dirt Series.

Blasting out of turn two, third-starting Mark Whitener rubbed under early leader Tim McCreadie in turn three on the second lap and led the rest of the way. The polesitting McCreadie tried vainly to keep up while pulling away from third-place finisher Russell Brown Jr. Jay Morris was fourth and Jeff Babcock fifth while hometown driver David Ponton was nearly three-quarters of a track behind Whitener in last.

Outside front-row starter Darrell Lanigan easily outdragged polesitter Brandon Cameron down the frontstretch and cruised to a heat race victory that earned him the pole position for the main event. Cameron couldn't keep up with Lanigan, but he comfortable held the second spot in the caution-free eight-lapper. Kevin Weaver caught Cameron late but settled for third while Jason Papich was a distant fourth. Mike Hammerle and Austin Kirkpatrick ran fifth and sixth. Donnie Chappell was challenging Papich for fourth on the final lap, but he spun in turn four and damaged his nosepiece. His car was towed off the track.

Using a limited powerplant, Cameron turned a lap of 17.90 seconds at the 3/8-mile oval, the only driver to crack the 18-second mark. Cameron will start on the pole of the first heat race. The polesitter for the second heat will be Tim McCreadie of Watertown, N.Y., the second quick qualifier.

A pair of eight-lap heat races will start straightup with everyone advancing to the 40-lap main event which pays $5,000-to-win.

Darrell Lanigan of Union, Ky., is debuting his new Club 29 Race Car before heading into World of Outlaws Late Model Series action at Bubba Raceway Park in Ocala, Fla., on Friday. … Darrell Lanigan outran Mark Whitener in last year’s event at North Florida, its first Super Late Model events during Speedweeks since 1998. … It's a beautiful Sunday afternoon with temperatures about 70 degrees. ... Tim McCreadie returns to North Florida after a flipping, violent accident last year during hot laps that ended his night. He's driving a new Rocket Chassis after running the past two days at Golden Isles Speedway near Brunswick, Ga. ... Illinois drivers Jay Morris and Kevin Weaver are traveling out of the same hauler with plans to head to East Bay Raceway Park on Monday. … Austin Kirkpatrick of Ocala, Fla., who ran frequently with the Carolina Clash Super Late Model Series last season, was a late entry. He lost his qualifying time because he used an American Racer tire on the left rear; UMP DIRTcar events allow Hoosiers only. … Track promoter Phil Guadagno said he will cooperate with getting modifieds out of the track quickly and on their way to Ocala, which is running a late-starting modified program Sunday night. Some teams plan to try the two-track doubleheader. ... North Florida's regular season begins March 8 and the United Dirt Late Model Challenge Series visits May 10.