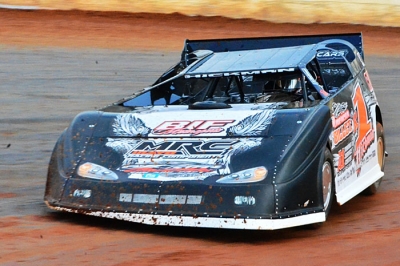 RINGGOLD, Ga. (Feb. 8) — Just days after losing his father to cancer, a mourning Riley Hickman of Ooltewah, Tenn., made an emotional trip to victory lane at Boyd's Speedway.

Hickman, the 2012 Southern Regional Racing Series champion, overtook racelong leader Tom Maddox of Centre, Ala., amid lapped traffic on the 18th lap of the Cabin Fever 40 and went on to earn $3,000 for his fourth career series victory. | Slideshow

Maddox started from the pole of the 40-lap feature and broke out to the early lead, while Hickman made an early charge from his eighth starting spot to fifth before the race was slowed by a caution on the second lap. Following the caution, Hickman continued to work his way to the front, moving to third on the eighth lap, taking second not long after and eventually slipping past Maddox in traffic.

Hickman broke away from the field after taking the point and appeared to be on his way to an easy victory, but a close call with the wall and a pair of cautions made things interesting in the closing laps. A yellow flag appeared for fluid on the racing surface on lap 33 and a multi-car pileup in turn one bunched up the field up just three laps later.

Hickman kept the field at bay following both restarts and went on to claim his first series victory since May 24, 2013, when he triumphed at Thunderhill Speedway in Summertown, Tenn. Third-starting Jeff Smith of Villanow, Ga., followed Hickman across the finish line, while Maddox rounded out the podium. Rick Hixson of Soddy Daisy, Tenn., and Caleb Ashby of Cunningham, Tenn., completed the race's top five.

Notes: Hickman drives a CVR race car powered by a Phantom Racing Engine with sponsorship from Hickman Manufacturing, MRC Racing Components, American Billet, Tucker Mobile Home Service, VP Racing Fuels, Allstar Graphics and RH Designs. ... Eric Cooley of Fulton, Miss., and Jason Welshan of Maryville, Tenn., were among drivers caught up in the lap-36 tangle; both drivers were among frontrunners for much of the feature. ... Defending SRRS champion Josh Putnam, of Florence, Ala., finished 11th in the series' 2014 opener; the complete SRRS schedule is expected to be released soon. ... Michael Page of Douglasville, Ga., won the Crate Late Model feature; Hickman finished third. ... Mother Nature pushed the event back one week. ... Long-time driver-sponsor connection David Duplissey and Dale McDowell partnered to purchase Boyd's over the offseason; the third-mile oval will switch race nights to Saturday from Fridays for 2014.