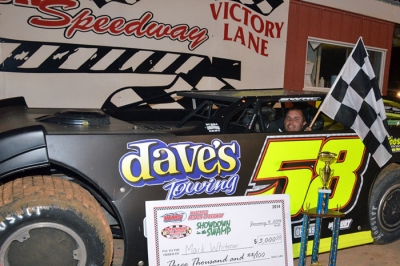 "It was truly a picture-perfect night for our team,” said Whitener, who returned to his Big Frog Motorsports ride after missing a December start because of a serious bout with the flu. “We had an awesome car from the time we unloaded, and I have to thank my team and all of our great sponsors for their support. This is just a great way to start a season.”

Travis Carter of Valdosta, Ga., was the runner-up while Rhett Carter of Blackshear, Ga., finished third. Evan Becton of Valdosta and David Browning of Jacksonville, Fla., rounded out the top five finishers.