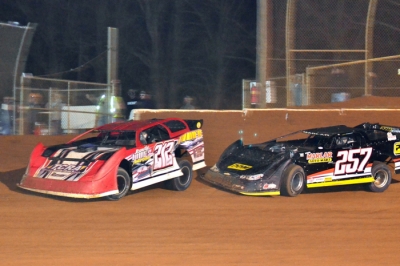 Josh Putnam (212) takes the the lead from Skylar Marlar. (photobyconnie.com)

In front of a standing-room-only crowd on a crisp but comfortable night, Putnam, the 2013 Southern Regional Racing Series champion, survived a back-and-forth battle with Marlar that will certainly add to the growing lore of the racy Middle Tennessee bullring.

Marlar, of Winfield, Tenn., jumped the cushion on the final turn of the final lap and crashed into the frontstretch wall, leaving the 11th-starting Erb, who entered the fray for the lead with 10 laps remaining, there to finish second in the unsanctioned event.

Ray Cook of Brasstown, N.C., who ran as high as second early in the race, finished third, while Tanner English of Benton, Ky., was fourth. Michael Chilton of Salvisa, Ky., completed the top five.

Putnam first took the lead on lap 22 with a slide job exiting turn two. Marlar had to check up to keep from being squeezed into the backstretch wall.

“It was a deal where I was kinda following him around the top. I knew lapped cars were coming and I didn’t want to follow somebody through the lapped cars,” said Putnam. “It was probably about a lap-65 or lap-70 pass, but as much speed as I had through the corner, I thought I would have had him cleared. I knew Ray was good and I didn’t want to lose the momentum and fall back to third.

“But going for my biggest win, I was kinda greedy, too.”

Marlar thought Putnam’s move was a little aggressive as well, especially with more than 50 laps remaining.

“I think he done it too early,” said Marlar, who lost the second spot to Cook two laps later on a restart following a caution. “I think if he left me some room, I could’ve got back by him. When he slid me there, I really got behind.

“When I got back to the lead, I was exhausted and the car was hot. I still could’ve finished second if I hadn’t messed up there. It just sucks that I wrecked that car.”

Marlar’s crumpled car never crossed the finish line. After leading laps 1-21 and then swapping the lead with Putnam in the late stages of the race, he was credited with seventh place, the first driver one lap down.

Before a caution on lap 70 set up a five-lap dash to the checkers, Marlar and Putnam had waged a race-long battle on the high side, often swapping the lead on the same lap. Meanwhile, Erb, of Carpentersville, Ill., moved steadily forward around the hub, and closed in on the leaders with just a handful of laps remaining.

His run toward a possible win all but ended when the yellow flag waved for the slowing car of Tony Morris and the spinning car of Brad Skinner, separate but simultaneous incidents at opposite ends of the speedway. Putnam, who had four lapped cars just in front of him and Marlar breathing down his neck just off his rear deck, was happy to see the caution.

“I’ve done this time and time again … made the wrong move in lapped cars and got body damage,” said Putnam. “You want to take your time, but the lapped cars were closing in and I wanted that clean air bad. You don’t have radios and you don’t know where that second-place man is.

“I was glad to see that caution, because then I had that clean air and I could maneuver where I wanted.”