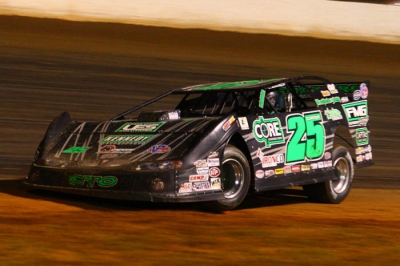 “It’s good to be back in victory lane in Mississippi,” said Clanton, whose biggest Magnolia State victories have come at Columbus Speedway. | Prelims | Slideshow | Video

Clanton, who started seventh, took the lead from last year’s winner and early leader Don O’Neal of Martinsville, Ind., on the 11th lap and led the rest of the way in the long-distance event at the quarter-mile oval just south of Meridian.

Neil Baggett of Shannon, Miss., who started on the pole, was among the early retirees and was listed 22nd in the 24-car field during a chilly weekend.

Clanton raced into the second spot after just five laps, then used the low groove to roll past the high-running O’Neal for a lead he’d never give up.

“We changed a lot of things since hot laps. It’s a a good thing they gave us hot laps, because I was terrible,” Clanton said. “We changed the whole rear end, front end, everything but the driver … My crew, they’ve stuck with me all year long, and my wife.”

O’Neal was within striking distance of Clanton late in the race, but wasn’t able to make a serious challenge.

“The track rubbered up and we just pretty much ran out of tire once we caught him,” O’Neal said, “and we just had to ride there behind him.”

Francis also made early progress but never contended for the lead.

“I think Don and Shane were just a little better than we were,” he said. “You know, we were pretty good through (turns) one and two and down that back straightaway, but we really struggled off (turn) four a little bit. We just got to where we’d shove the middle of the corner a little bit there. … We ran third. Not a bad night.”

Notes: Clanton’s Kennedy Motorsports Capital Race Car is powered by a Clements Racing Engine and sponsored by Core Construction, Keyser Mfg., Ironco and b3 Architecture + Planning. … Clanton notched his first victory since a Sept. 29 Southern All Star triumph at East Alabama Motor Speedway in Phenix City, Ala.; the World of Outlaws Late Model Series regular has eight feature victories overall in 2013. … Lucas Oil Late Model Dirt Series regular Don O’Neal was guest starring a No. 71 for Louisiana-based Childress Racing as a teammate to Chris Wall of Springfield, La., who finished 13th. … Jeremy Payne took second from O’Neal for a stretch after a restart in the first half of the race. … Two-time race winner Brian Birkhofer of Muscatine, Iowa, finished 21st in a Ray Moore-owned MB Customs chassis; Moore was 15th. … Jamey Boland of Cuba, Ala., won the weekend’s Crate Late Model feature over Shep Lucas.