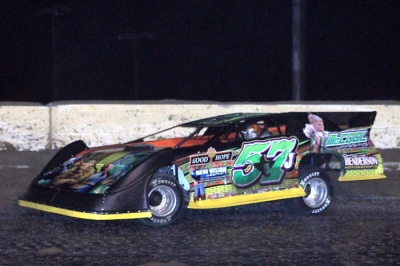 McCool stormed to the front to take the lead on lap 25 of the 75-lapper and later overcame a few close calls in lapped traffic and a late-race charge from Brian Rickman to claim his fourth overall victory of the season in the MSCCS season finale. Slideshow | Prelims

Rickman settled for second after advancing from his seventh starting spot with 10th-starting Robert Baker of Bryant, Ark., claiming third. Chris Wall of Springfield, La., wrapped up his second MSCCS championship with his fourth-place performance, finishing one spot ahead of points runner-up Neil Baggett of Shannon, Miss.

Wall and Rick Rickman, the runner-up’s brother, brought the field to the green flag with Wall grabbing the initial lead over Rickman in turn two. The lead duo produced some early sparks when they tangled in turn three one lap into the race. Rickman was charged with the caution, sending him to the tail of the field while Wall retained the lead over Ray Moore, Brian Rickman, Timothy Culp, and Baggett.

As the race went back green, Wall jumped to a sizeable lead before Culp, who snagged second on the restart, began to challenge for the lead. As the battle raged up front, McCool had passed fifteen cars to move into the top five with just five laps complete.

McCool’s continued his march forward through the following circuits, overtaking Culp for second on lap 16. He completed his charge ninth laps later, using the cushion to race past Wall for the lead on lap 25.

With McCool at the point, Culp slowed from the pack to draw a lap-27 caution, ending his bid for a solid finish. The ensuing restart saw McCool again motor away from the pack, building a comfortable lead as he diced through lapped traffic.

Disaster nearly struck for the leader as he made contact with Chad Thrash while trying to lap him on lap 48. Officials ultimately credited Thrash with the caution, allowing McCool retained the lead. Over the final 27, laps, McCool withstood challenges from Brian Rickman to claim the win with the hard-charging Baker in third.

Notes: McCool drives a Victory Circle Race Car from Billy Moyer’s shop with a Jay Dickens Racing Engine and sponsorship from McCool Logging, Southern Belle, Henderson Motorsports, MSR Mafia and Good Hope. ... McCool, a regular on the World of Outlaws Late Model Series, claimed his fourth overall victory of the season and his second on the MSCCS tour. ... Rain moved over the track oval just after the MSCCS feature, forcing officials to postpone the remainder of the event until Sunday afternoon at 1pm. Action resumes with a $5,000-to-win feature for the NeSmith Late Model Dirt Series along with finales for the street stocks, modifieds and Mini Stocks.