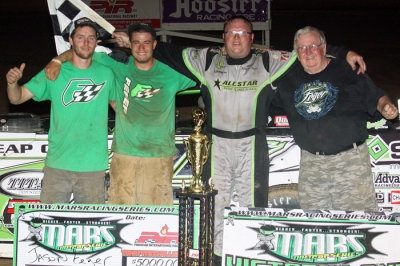 Feger outran Ryan Unzicker in the first half of the race, then kept MARS points leader Tony Jackson Jr. and Bobby Pierce in check in the second half of the race in wrapping up his fourth career victory on the Missouri-based tour. He survived a scrape with lapped traffic on the frontstretch and went on to victory lane.

“This is one of my favorite places. We always run really good here if we don’t have flat tires,” Feger said. “We had everything together tonight. The car just was working really good. The car was really, really good before we got in that little deal with lapped traffic, and it really messed up the nose.

“Honestly, I didn’t think there was any way I was going to win as bad as it was handling after that happened (compared) to the way it was handling before, because it was awesome before. But hey, it just worked out tonight. I just tried to keep 'er straight as I could and pull away and just glad to get another win."

The third-starting Pierce, of Oakwood, Ill., settled for second with Jackson, the Lebanon, Mo., driver who went to a backup car after a tangle in his heat race, rallied from 23rd to finish third at the high-speed 3/8-mile oval. Jason Riggs of Harrisburg, Ill., and Tim Brown of Calvert City, Ky., rounded out the top five in a race where fewer than 10 cars were running at the finish.

Unzicker, of El Paso, Ill., was running second when apparent engine problems forced him out on the 27th lap.

Notes: Feger’s Pierce Race Car is powered by a Rhyne Competition Racing Engine is sponsored by Cheap Cars, Box Seat Productions, Titan Industries, Allstar Performance, Mulligan’s, Pro Tire & Auto, Advanced Racing Suspensions and VP Racing Fuels. ... Terry English had a rollover accident at the top of the backstretch in his No. 33 after contact with Tony Jackson Jr. in the first heat; English walked away apparently unharmed but his night was over. ... Jackson finished seventh in the heat, the last car running; he went to a backup car for the main event. ... Motor problems struck Tyler Reddick in time trials; he scratched for the night. ... The car of Jason Riggs fell off the lift while unloading; a crew member hurt an ankle jumping off the lift. ... MARS competitors head to Federated Auto Parts Raceway at I-55 on Saturday. ... Some of the same drivers will go to Highland (Ill.) Speedway on Sunday for the $10,000-to-win UMP DIRTcar Summernationals makeup event.