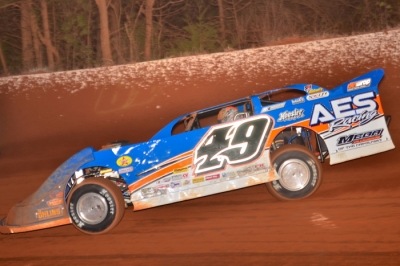 LANCASTER, S.C. (March 30) — If Jonathan Davenport’s first two victories of the 2013 season weren’t enough to prove that he’s back to his old self with his new AES Racing team, his third win should surely do the trick.

“This just shows what can happen when you have a crew and a team that believes in you,” said the 29-year-old Davenport, who joined AES Racing over the offseason after losing his ride with Clint Bowyer Motorsports following a dismal 2012 season. “I hate that things happened the way they did over there, but everything happens for a reason. I love what I’m doing now and I’m back having fun when I’m racing. I think I’ve found me a home for quite a while.”

Davenport, whose two previous victories came in Southern All Stars Series action, slipped by polesitter Steve Shaver of Vienna, W.Va., on lap 25 of Saturday’s 60-lap main event and never looked back, cruising to a convincing win at the high-banked half-mile oval while Shaver settled for second in a race slowed by six cautions. Last year’s Carolina Crown winner Scott Autry of Fayetteville, N.C., advanced from his 16th starting spot to finish third ahead of Steve Francis of Ashland, Ky., and Tim Allen of Kannapolis, N.C.

The third-starting Davenport showed early that he had a car to contend with, jumping to second on the race’s initial start and constantly pressuring Shaver through the race’s opening laps. Davenport twice pulled alongside Shaver before a lapped car forced him to check up, giving Shaver a brief respite. But a lap-12 caution erased the gap and Davenport resumed his onslaught when the race restarted.

Davenport continued to pressure Shaver through a long green-flag run following the lap-12 yellow but couldn’t get a strong enough charge to complete a low-side pass. He finally got the break he needed on lap 25 when Shaver slipped up slightly in turns three and four as the leaders raced through traffic.

“The way these Carolina tracks are, you can pass just about everybody but the leader because you run through that little bit of grit,” Davenport said. “But I knew if I could stay close to him I could probably get him when we got to lapped traffic. And I knew if I ever got by him I was quite a bit better than him.”

Davenport cruised through the second half of the race with his only obstacles coming in the form of lapped traffic and the race’s true double-file restarts. But he handled it all with apparent ease in winning by nearly a straightaway after the race’s final seven laps ran caution free.

“You always worry on those restarts because I know Kevin and Lee Roy (Rumley), they build some big horsepower,” Davenport said of the Rumley’s in-house engine program for Shaver’s Bobby Labonte Racing team. “These Clements motors are great, but anything can happen on a restart, especially when you’re double file like that. I never knew when that bottom line was gonna come in and I was just hoping that momentum line up top was gonna be better, so I definitely didn’t like seeing the cautions once we got strung out.”

Shaver’s runner-up effort came in his first race in a Longhorn Chassis for Bobby Labonte Racing. Shaver knew he wasn’t as fast as Davenport from early in the event, but he was happy with the solid showing in his first night in a new car.

“I don’t think there was any holding him off,” said Shaver, who made his first start of the season after he and his Rumley Enterprises team joined forces with Labonte’s program over the offseason. “He could roll the corners better than me. I was a little tight and when the track got dryer and slower it showed up more. But I feel like it’s a pretty good debut for us and I’m glad Davenport won it if we couldn’t win it.”

Autry’s run to the front was similar to his surprise victory in last year’s inaugural Carolina Crown. The veteran driver was quiet for the first half of the race before charging into the top five late. He moved up to third on a lap-50 restart but couldn’t find a way around Shaver for second in the final 10 laps.

“Jonathan definitely had the field classed,” said Autry, who was the Carolina Crown’s biggest mover for the second straight year after winning last year’s 75-lapper from the tail of the field. “If it had been 75 laps instead of 60, I believe I could’ve got to second at least, but it would’ve been tough to keep up with Jonathan.”