Arthur outduels Shirley for $3,000 at Clarksville 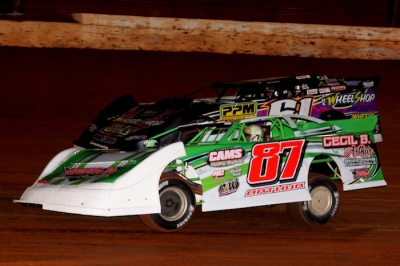 CLARKSVILLE, Tenn. (March 8) — With side-by-side frontrunners Brian Shirley and Walker Arthur facing a pair of slower cars directly in front of both of them on the 10th lap Friday night, the logjam created three intense laps at Clarksville Speedway. | Notebook | Slideshow

The opener of the ninth annual Tuckassee Toilet Bowl Classic and $3,000 was on the line as the drivers tried to find a way past the slower cars. And it appeared Shirley was the first to solve that puzzle, diving between them in turn three to apparently reclaim the lead he’d held the first nine laps.

Arthur stuck his No. 87 in the low groove exiting turn four, wedged past the slower cars himself and managed to hold a narrow margin at the stripe on Shirley for the third straight lap. From there, he pulled away for his first victory at Clarksville and first on the MARS DIRTcar Series.

“When I made that move to shoot underneath of ‘em, and we come off the frontstretch, it was him next to me — and that’s what I wasn’t expecting,” said the pole-starting Shirley of Chatham, Ill., who ended up second in the 30-lap feature.

“When Brian went to the top, I figured that was the only way we were going to have anything to do with him, was if lapped traffic came into play,” Arthur said. “And they hung him out just right there, right there in traffic. Otherwise, I don’t know if we’d been able to race with him.”

When the moment of truth came, the Forest, Va., driver wasn’t shy.

“I knew that I had to go right then. We’d been kind of taking it easy on those guys, and I knew when I saw him getting a run through the middle, I knew I had to go on the bottom or we were going to left behind again, and lose the one opportunity we had.”

Making the most of that opportunity, Arthur built more than a half-straightaway advantage by the midway point, then kept Shirley in check when things tightened up amid traffic again in the final five laps.

It gave Arthur his first victory in two 2013 outings and a third major triumph going back to last year’s late-season hot streak of two $10,000 victories.

“Those runs were close to home,” said Arthur, who was a solid fourth in last March’s Toilet Bowl finale. “It’s good to come out to a different state where we haven’t run a good bit, and get to show off in a front of a crowd. And hopefully we can continue to do that the rest of the year.”

Shirley wasn’t too disappointed in his first outing of 2013 in a brand new car.

“It's a brand new car that had never seen the racetrack until (practice) yesterday, and we had a few little bugs to get out of it last night,” he said. “All in all, I did what I hoped to do, run a top-three or top-five and be in contention for the win.”

The feature was slowed by two early cautions, first for Bryan Singleton’s turn-one spin on the third lap, then when seventh-running Justin Wells spun into the infield on the fifth lap.

Action continues Saturday evening at the Tuckassee Toilet Bowl Classic with a $5,000-to-win MARS event along with several local divisions. Shirley hopes to beat Arthur and everyone else in the finale.

“This red clay is a little tricky. It’s not like what us Illinois boys are used to,” he said. “We’ve come down here the last couple of years, and it seems like the first night we’re not very good, and then the second night we normally turn it up. So maybe tomorrow night we’ll turn it up and get the job done.”