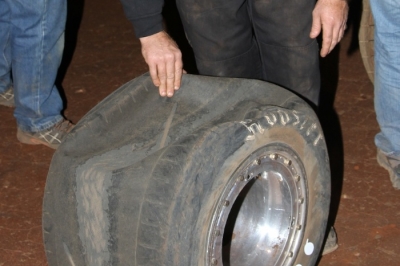 A crew member looks at Marlar's tire after the race. (Clifford Dove)

GAFFNEY, S.C. (Nov. 18) — How much air did Mike Marlar have in his right-rear tire Sunday when the checkered flag flew at Cherokee Speedway’s Blue-Gray 100? About $10,000 worth.

In an event where tire wear is always important, the 34-year-old driver from Winfield, Tenn., made that critical tire last just long enough to cross the finish line for a $10,000 victory in the 22nd annual event, Marlar’s first career Southern All Star Dirt Racing Series victory. | Slideshow | Video

As the victory lane celebrations began taking place on the frontstretch, the car had a visible lean to the right as the air seeped out of the tire that went flat by the time he headed back to the pits. But Marlar was standing proud after his second victory of the weekend as he continued solid performance over the last six weeks.

“I can’t let all these guys down that stand behind me,” said Marlar, who drives for Douglasville, Ga.-based Bryson Motorsports. “I just have to get up in the seat and push everything I can, and be as smart as I can. It doesn’t always work for me every time, but I do try hard every time.”

Marlar’s racing has been consumed with tire issues over the past nine days. He has vehemently protested his innocence after East Alabama Motor Speedway officials disqualified his National 100 fast qualifying time when it didn’t past postrace inspection. Then in Saturday’s victory at Screven Motor Speedway in Sylvania, Ga., Marlar drove the final 18 laps of the Ultimate Super Late Model Series event with a flat left-front tire after contact with another car.

And finally his postrace flat tire at Cherokee, where many top contenders fell by the wayside after blowing tires.

On Sunday evening at Cherokee, Marlar didn't have the fastest car throughout the event, but never fell out of the top five in babying his right-rear tire. Southern All Star champion Randy Weaver of Crossville, Tenn., led from the drop of the green flag all the way to the 97th lap of the 100 lap event before falling victim to a flat right rear tire.

Chris Madden of Gaffney, S.C., who race second most of the race, also fell victim to tire woes in the final laps.

After taking over the lead from Weaver, Marlar fended off the challenges of home-state standouts Johnny Pursley of Clover and Dennis “Rambo” Franklin of Gaffney in the last couple of laps. Pursley and Franklin both attempted separate high-side passes on Marlar, as he protected the coveted low groove. But Marlar successfully fended off both of their efforts and cruised to the victory.

Pursley wasn’t around at the finish as Jared Landers of Batesville, Ark., ended up second with Franklin third. Casey Roberts of Toccoa, Ga., was fourth and Ivedent Lloyd Jr. of Ocala., Fla., rounded out the top five.