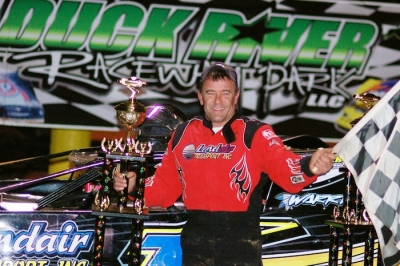 Cook, of Brasstown, N.C., finished second after starting ninth, while the fifth-starting Arthur, of Forest, Va., was third. Dennis Erb Jr. of Carpentersville, Ill. rallied from deep in the field — not once, but twice — to finish fourth, and Ross Camponovo of Clarksdale, Miss., was fifth.

While Hill was in control for most of the race, he was under heavy assault from Cook and Arthur in the final five laps, turning what began as marathon into an all-out sprint to the checkered flag. Cook finished less than four-tenths of second behind the winner, with Arthur closer than that to Cook’s bumper in a finish typical for the racy third-mile central Tennessee bullring.

Both Hill and Cook agreed that an increasing number of holes in the bottom grove aided in creating a three-way race for the win in the waning circuits.

“There were a few holes,” Hill said. “The top was good if we had all got up there early. There were just a few holes in the bottom that it you hit just right would give you traction and if you didn’t you would lose a little ground. I knew as early as Ray got to second I was just gonna hold my line ... just keep going the way I was going.”

Cook applied token pressure early and began to pick up the pace midway through the race. He stalked the leader in traffic and took advantage of a long green flag run between lap 42 and lap 56 to apply even more pressure. Four cautions in the final 19 laps thwarted Cook’s effort, however.

Cook took a peek to the outside, but had to slide back down the track when Arthur entered the fray with six laps to go.

“I do think the cautions hurt me,” said Cook. “I felt like we were about equal. I wanted to try the top halfway through the race when we had a little room (on third place), but when (Arthur) got there, I had to get back down to protect second.”

What appeared to be a two-car breakaway, turned into a three-way race for the lead as Arthur tracked down the leaders. Fresh off a $10,000 victory last weekend at County Line Speedway in Elm, City, N.C., Arthur hoped his late-season surge would continue.

“After that $10,000 last week, I was wondering if we still had that horseshoe,” said Arthur. “To be able to get right there ... when Ray moved up that gave me a chance to get right under him. It’s great to be able to get up there and race with them. To be racing with those two guys who have so much experience in Tennessee was great.”

Hill led the first six laps, but after a tangle with a lapped car, he watched as Knoxville, Tenn.’s Miller drove by on lap seven. Miller held the point for six laps before Hill got back by for the lead. Hill said he wasn’t overly concerned about reclaiming the lead, but he felt bad about rubbing doors with Miller during the process.

“It was so early in the race ... when he went by, I got back to him pretty quickly,” Hill said. “Unfortunately, we did get together and it cut his tire down. We’ve raced together a lot and we’re friends. I hate that for him, because I think that he may have had a top-five car too.”

Notes: Hill’s Warrior Race Car is powered by a Vic Hill Race Engine and sponsored by Landair Transport, Pilot Travel Centers, Baird Transport, Outlaw Race Parts, Preferred Sandblasting & Painting and The Orthopaedic Institute of Western Kentucky. ... Hill’s quick time on Friday night lowered Duck River’s track record. It marked the second track record Hill recorded this year. He also broke the fast time at Wythe Raceway in Rural Retreat, Va., this season. ... Dennis Erb Jr. started 14th and was up to fifth when a right rear flat sent him to the pits. He returned to the track in 12th, and rallied to a fourth-place finish. He said had he not had the flat he may have had a chance to race with the leaders at the end. After the race, his second right rear tire was flat. ... Victor Lee of Harrodsburg, Ky., had an outstanding run going in the top three, but saw it go up in smoke as he had motor trouble on lap 32. ... Other than a multiple-car spin on the initial start, the worst accident occurred on lap 56 when Ricky Arms spun and collected Braden Mitchell, David Jackson and Daniel Miller. Tim Busha was running sixth at time, but pulled off the track during the long caution. ... Josh Putnam was not in his regular No. 212. He was instead subbing in the No. 44 usually piloted by Randy Todd.