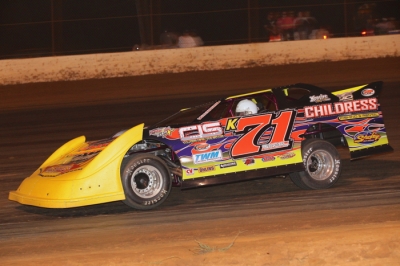 Don O'Neal heads for victory in a Childress Racing No. 71. (foto-1.net)

Starting from the outside of the front row in a brand new car, O’Neal drove around polesitter Billy Moyer of Batesville, Ark., on the second lap and cruised for the majority of the race. He built more than a straightaway advantage at times before pulling away from Mike Marlar of Winfield, Tenn., after a lap-66 restart.

“We’ve had fun all weekend whether we won or lost. It’s just been a good weekend,” said O’Neal, who drove for the Louisiana-based Childress team. “We were fast right out of the box and ain’t done much to the race car all weekend. It’s just one of those good weekends you always hope for.”

The ninth-starting Marlar scored the runner-up finish only after holding off a late challenge from 11th-starting Dane Dacus of Lakeland, Tenn. Clint Smith of Senoia, Ga., finished fourth after running as high as second while Steve Francis of Ashland, Ky., rounded out the top five in a race slowed by just two cautions. Moyer, who was looking for his first Fall Classic victory, faded to a seventh-place finish.

O’Neal’s toughest challenge came in the form of lapped traffic. Slower cars raced in nearly every groove on a surface that was black from top to bottom, making selecting the right lane through traffic difficult. But O’Neal deftly handled the slower cars and never allowed his competitors the opportunity to move within striking distance.

“There early, I had no idea to run low or high,” O’Neal said. “It was just so tough to pass because of the momentum. But when I passed those lap cars low in one and two, I kinda figured out it was probably the best place to stay.”

It didn’t matter where O’Neal ran on the racetrack, he always seemed by far faster than any of his competitors. He pulled away from Moyer running the high groove early, then maintained a healthy advantage over a charging Smith through the middle portions of the race. Finally, O’Neal ran a low line through turns one and two and the high groove at the other end of the track while pulling away from Marlar late.

“The car was actually pretty good wherever I had to run it,” O’Neal said. “We hadn’t put hard tires on yet, so we really didn’t know what we were gonna have (for the feature). We really figured as good as we were on the soft stuff, just tighten up a little bit and we’d be OK. And we was.”

While O’Neal checked out, the multi-grooved racetrack produced plenty of close racing action behind him. Marlar was often in the thick of the battles, at times going three wide while making his run toward the front.

“This is a really fun place to race because you’ve gotta chase the groove on the racetrack all over,” said Marlar, who finished in the top five at Whynot for the second straight year. “Literally, every part of that track was better than the other parts at some point in the race. So not only are you chasing the racetrack, but you’re also trying to pass people too while you’re doing that.”

Marlar stuck with O’Neal briefly following the lap-66 restart, even looking under the leader a few laps after the restart. But O’Neal picked up his pace and easily pulled away.

Struggling to keep up with O’Neal through traffic, Marlar settled into second and held off the hard-charging Dacus in the closing laps to score the runner-up finish by less than a car length.

“I showed (O’Neal) my nose there and he changed his line. It was over with them. I couldn’t do nothing with him,” Marlar said. “The harder I drove my car, the better it worked. So once I got my tires fired up and gripping, I kinda stayed after it. But after that caution they cooled back off and I was too free again.”

Dacus was one of the fastest cars at the end of the race. After restarting sixth on lap 66, he began picking up spots running the low groove and tracked down Marlar in the closing laps. He was hoping for a caution to reset the field for a run to the finish, but that never came.

“I’d like to had a caution there toward the end to kinda bunch us back up,” Dacus said. “I feel like we were coming pretty good. But you never know if O’Neal and Marlar were taking it easy toward the end. Either way though, it’s a good run for our team.”

Notes: O’Neal’s Childress Racing MasterSbilt is powered by a Jay Dickens Race Engine with sponsorship from Childress Fishing and Rental, Childress Inspection Services and Stuckey Enterprises. … O’Neal’s first Fall Classic victory came in 2001 at the now-closed Queen City Speedway in Meridian. … O’Neal plans to run the Childress Racing entry at the Cotton Pickin’ 100 Oct. 26-27 at Magnolia Motor Speedway in Columbus, Miss., and possibly at the World of Outlaws World Finals Nov. 1-3 at The Dirt Track at Charlotte in Concord, N.C. … The lap-one pileup was caused by a spin by fourth-starting Jason McBride of Carbondale, Ill. The cars of Neil Baggett, Mike Boland and Jeremy Broadus suffered the most damage in the incident. … O'Neal's teammate for the weekend, Chris Wall, ended up 12th after slowing to bring out the lap-66 caution. … Francis and the Barry Wright Race Cars house car team debuted a new race car at the event. … Two-time Fall Classic winner Brian Birkhofer was never a factor in finishing 18th. … Justin McRee picked up a $2,000 payday for winning the Crate Late Model portion of the event. … The event was marred by a wreck during Friday’s prelims that sent Leon Henderson of Laurel, Miss., to a Meridian hospital with a concussion and broken elbow. Henderson remained in the hospital Saturday night.