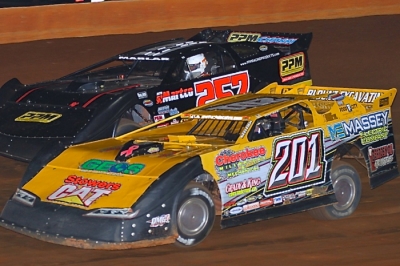 Ogle, who entered Saturday’s event with an incredible 12 runner-up finishes to one victory this season, started from the pole of the 35-lap race and left no doubt who had the fastest car. The 47-year-old driver bolted to the lead on the race’s initial start and cruised to victory over runner-up Mark Vineyard of Knoxville, Tenn. Dale McDowell of Chickamauga, Ga., finished third with Skip Arp of Georgetown, Tenn., fourth and series points leader Riley Hickman of Ooltewah, Tenn., fifth.

“I know I should be really happy (with 12 runner-up finishes), but I was needing a win,” said Ogle, who last visited lane on May 25. “It had been so long since I’d won earlier in the year that I was beginning to think I wasn’t gonna get another one, and I finally got another one. Maybe we can get a couple more before the year’s out.”

Just as he had the night before in the first leg of the weekend’s SRRS doubleheader at the 411 Motor Speedway in nearby Seymour, Tenn., Ogle began his night by setting fast time in qualifying to top a stout field of Super Late Model competitors.

Fellow front-row starter Skylar Marlar of Winfield, Tenn., trailed behind Ogle through the early laps with McDowell running third as the looked to claim back-to-back victories on the weekend.

The leaders reached lapped traffic by lap six, but that didn’t slow Ogle’s progress. At times, the front-runner managed to get as far as a full straightaway ahead of his closest pursuers.

The race’s only caution came out on lap 21 when Michael Chilton came to rest on an access road that was deemed unsafe by series officials. The break in the action only briefly erased Ogle’s advantage. As soon as the green flag waved, he quickly set about the task of building another large lead.

By the time the checkered flag was shown to the field, Ogle had once again placed himself a full straightaway ahead of the competition in racing to his second-career SRRS victory.

“I knew that if I didn’t win tonight it would be my fault because the car was just that good,” Ogle said. “I didn’t wanna get over confident; I just knew I didn’t need to make any mistakes. Luckily, I was able to bring it home.”