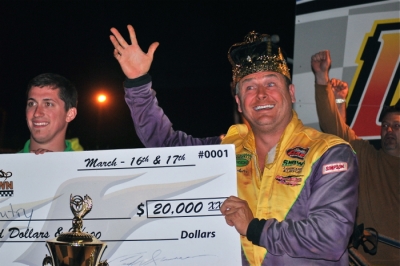 After surviving 75 rough-and-tumble laps around the high-speed half-mile oval, the 22nd-starting Autry, 45, of Fayetteville, N.C., had a much better view of the front. | Video | Sidebar | Slideshow | Notebook

Autry worked his way forward while others fell by the wayside and took the lead when Jared Landers of Batesville, Ark., pitted with a flat tire during a lap-63 caution. Landers quickly worked his way to second with fresh rear tires, but Autry denied his bid for a comeback win and instead scored an upset victory of his own, earning $20,000 for the biggest win of his career.

Landers settled for the runner-up finish in the inaugural event while Donald Bradsher of Burlington, N.C., finished third, the last car on the lead lap. Ricky Weeks of Rutherfordton, N.C., and Dennis Franklin of Gaffney, S.C., rounded out the top five in a race that had just six finishers.

“I don’t know when this is gonna sink in,” said Autry, whose previous career highlights include five victories and the 2002 championship on the Carolina Clash Super Late Model Series. “I really didn’t think we had much a shot at winning this thing. When I pulled on the track, Tim (Allen) was back there with me on about the back row and I took my hands and made binoculars out of them and said ‘Tim, I can’t even see the front.’”

It didn’t take Autry long to improve dismal view as he worked his way into the top 10 by lap 15 and into the top five by lap 30. He battled among the front-runners throughout the second half of the race and challenged Landers for the top spot through the race’s longest green-flag run from lap 41 to 63.

Landers’ flat tire under caution gave Autry the break he needed, but Landers quickly battled back after restarting fourth with fresh rubber. Landers first pulled alongside the leader in turns one and two on lap 69, but contact between the two drivers allowed Autry to pull back ahead.

After again pulling alongside Autry down the back straightaway, Landers dove hard into turn three on lap 72. But his slide job carried him too high, allowing Autry to cross over from the top groove to the bottom and regain the position at the flag stand.

Autry pulled away in the final three circuits, as Landers’ car began to run out of fuel after a race that lasted nearly two hours and included 15 cautions and one red flag.

“He got up under me in one and two and we made contact where I was coming down the track and didn’t know he was there,” Autry said of his battle with Landers. “A couple laps later he really drove it off in three in four and I mean he sailed it off in there. It just slid too high up and I was able to make the move back by him down the front straightaway. And then we were luckily enough to hold him off.”

Landers, who led 31 laps after taking the lead from Chris Ferguson of Mount Holley, N.C., on lap 32, had arguably the best car in the race. He was in position to retake the lead in the closing laps, but his engine sputtered in the race’s decisive moments.

“We got to Autry there and I thought we was gonna make a run on him,” said Landers, a regular on the Lucas Oil Late Model Dirt Series who was coming off a victory on the national tour the previous week. “I slid him once, but I slid him too hard and he crossed back. But all I wanted to do was shake him up a little bit so I could make a pass on him. The next lap I set the car up and jumped through the holes … but the car stumbled. We was out of fuel. We’d done coast around there so much that it would (stumble) when I hit the rough spots.

“It was a wild race, and congrats to Autry cause that’s a big win,” Landers added. “We did everything we could, but you just can’t figure in that many cautions.”

The ninth-starting Bradsher was one of the early movers before slowing down to save his equipment through the middle portions of the race. Bradsher was in position to challenge for the win late in the race, but a broken brake line hampered his efforts in the closing laps.

“I felt like we had a car to contend for the win, but the brakes faded on it at the end,” said Bradsher, who along with surviving the rough track, survived a backstretch tangle with Chris Madden on lap 18. “After we got in that altercation on the back straightaway, I said we’ll just ride where we can and just salvage the race car. To look at the race car, don’t look like there’s much salvaged.”

Landers’ Clint Bowyer Racing teammate Jonathan Davenport of Blairsville, Ga., led the first 19 laps of the race after starting second. After losing the lead to Ferguson, Davenport was still running among the leaders when a broken oil pump belt sent him to the pits on lap 46.

The third-starting Ferguson powered from third to first on a lap-19 restart, but he jumped the cushion on lap 32, allowing Landers to move by. Ferguson was running third on lap 63 when overheating issues forced him out of the race.

Polesitter Casey Roberts of Toccoa, Ga., got the jump on Davenport on the first attempt to start the race, but a caution negated the start. Davenport got the jump on the second start and Roberts never led a lap. Suspension issues forced him out of contention midway though the race.