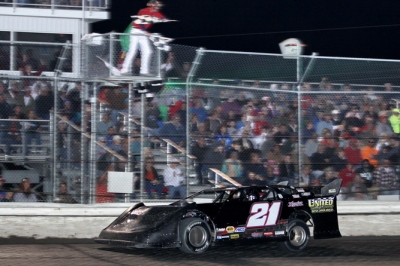 For Lloyd, it was his third hometown track championship — but first since 1993, his previous season-long run at the track — while Whitener collected his second straight touring championship and first on the NLMS tour. Whitener won last year's Ocala track title and a UDLMC touring crown.

Lloyd's performance in the 50-lapper was a no-doubter. He lapped everyone but Whitener and, before Bobby Richardson blew a tire and hit the turn-two wall on the 48th lap, was more than three-quarters of a lap ahead of his closest pursuer.

Rodney Wing of Meridian, Miss., making a rare Florida appearance, was sixth in the 22-car field.