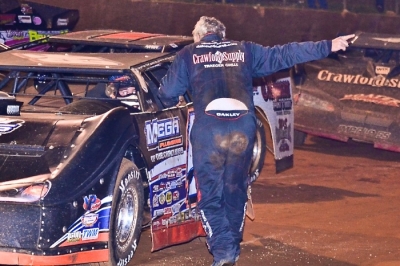 The 21st annual Blue-Gray 100 winner was apologetic and called himself "stupid" for contact on lap 72 that allowed him to regain the lead from fellow Georgian Dale McDowell, virtually assuring his $10,000 payday in the finale of the first-year Ultimate Super Late Model Series. | Video | Slideshow

"You always hear of a driver losing his head, and that's what I done tonight. I don't know why I did that. I don't know. I just hate it for Dale. He probably had the best car tonight," said Davenport, who increased his earnings to more than $100,000 since Oct. 1 with his eighth victory overall during that span. "That ain't definitely the way we wanted to win it. I apologize to Dale and all the other good cars I tore up, too."

Davenport, who took the lead from Steve Shaver of Vienna, W.Va., before the halfway point, was in control until McDowell made a daring outside pass exiting turn two on the 68th lap. Trying to regain the spot after a restart four laps later, Davenport dove under the leading McDowell in turns one and two. But Davenport slid up into McDowell's high line, knocking the Chickamauga, Ga., driver into the turn-two concrete, where he collected three other cars in a heap.

"He probably wouldn't have done it to me," Davenport said. "I was going to do it, then at the last second I tried not to, but I was already committed so it made it probably even a little worse. But, I don't know. Usually Dale don't get upset like that unless somebody does something wrong."

After climbing from his car, the 17th-finishing McDowell made the long walk to the frontstretch, where Davenport was parked during the red flag. The usually reserved McDowell repeatedly pointed toward turn two, leaning into Davenport's cockpit to express his displeasure before two officials pulled him away.

After the race, the 17th-finishing McDowell was direct and to the point while holding a bag of ice to a swollen hand. "I got took out," said the Clint Bowyer Racing driver. "If you want to know any more than that, you need to go ask him."

The Davenport-McDowell tangle also affected the battle for the Ultimate Series championship with Chris Ferguson, Casey Roberts and Chip Brindle separated by just four points entering the event. Roberts and Ferguson restarted lap 72 among the top five and Ferguson was caught up in the middle of the turn-two pileup.

Ferguson, needing to finishing within one position of Roberts to secure the title, pitted for repairs and rallied back toward the front. He ended up one spot behind Roberts in seventh to win the $15,000 crown.

"I was kind of worried there at first when Davenport and McDowell got together and we tore the car up pretty bad. The steering wheel turned to the left once I pulled out, so I knew something was bent," Ferguson said. "I gassed up and it seemed to run fine. We came in and put on a softer tire and really took off.

"We got all the way back up to Casey and hung on there ... it's pretty crazy, because I honestly gave up there for a little while. I'm not going to lie. When I wrecked, I didn't know how bad the car was and we got some good breaks on some restarts and picked off two or three at a time. I guess we just never gave up. My crew never gave up on me."

At the outset of the season finale, Shaver took the lead from outside the front row while Davenport gave chase early. Davenport bided his time before taking the lead on a lap-43 restart at the 3/8-mile oval.

By lap 58, the battle for the lead had become a three-way dogfight between Davenport, Shaver and McDowell. On lap 66, McDowell cleared Shaver for second and set his sights on Davenport, sweeping around the outside in turn two to take command on lap 68. Shaver retired during a lap-69 caution, and another yellow slowed the action on lap 72 with McDowell leading Davenport.

On the restart, Davenport dove under McDowell entering turn one with a move that will go down in Cherokee history. Not willing to yield the lead, McDowell stayed in the gas alongside Davenport's right rear quarter panel.

With both cars dancing on the edge of control, they both washed up the track and McDowell's car slammed the turn-two wall. After the cleanup and the brief McDowell-Davenport discussion on the frontstretch during the red flag, Davenport resumed the race and led the rest of the way. He took the checkered three lengths ahead of Madden before his subdued victory lane celebration.

Notes: Davenport's Barry Wright Race Cars house car is sponsored by Mega Plumbing, En Compass Solutions, Elite Concrete, Baird Transports, Nicholls Plumbing and JRI Shocks. ... The victory is Davenport's seventh in his past nine Super Late Model races. ... He scored a series-leading four Ultimate Series victories this year. ... Mike Marlar was running in the top five when he dropped out just before the McDowell-Davenport contact. ... Ferguson won the tour's most recent visit to Cherokee on Oct. 1, his only victory of the season on the series. ... Ferguson dedicated his title to the memory of former sponsor Jack Starrette and Erin Badger, the late daughter of one of his sponsors. ... Chip Brindle of Chatsworth, Ga., also in the battle for the title, was in a late-race wreck and ended up 14th.