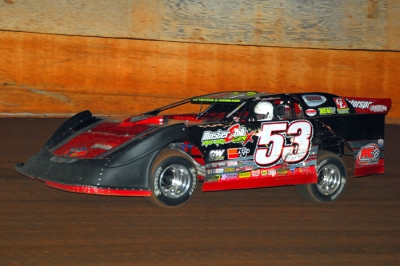 Further back, Billy Ogle Jr. of Knoxville, Tenn., was sixth in the rundown, good enough to clinch the Southern All Star championship over Rookie of the Year William Thomas of Phenix City, Ala., who finished seventh. Ogle entered the race just two points ahead of Thomas.

Davenport, who took the second spot from Dale McDowell of Chickamauga, Ga., before the halfway point, was the runner-up followed by McDowell, fast qualifier Brian Reese of Sharpsburg, Ga., and Shane Clanton of Fayetteville, Ga.

Ogle secured the title despite hitting the wall in time trials, a wreck that forced him to the pits without completing a qualifying lap at speed. He was able to make repairs and returned to the track for a single lap to help him salvage time trials.

Notes: Cook's MasterSbilt Race Car has a Race Engine Design powerplant and sponsorship from Rockstar Energy Drink, Makita Industrial Power Tools and Hicks & Ingle. ... Cook's previous Southern All Star victory came May 8, 2010, at North Georgia Speedway. ... Among cautions in the main event were a lap-five yellow for Tommy Kerr, who suffered some front-end damage on his car. ... Brett Miller drew a yellow when he got into the turn-four wall on lap 35. ... David Payne spun to block the track with Derek Ellis, Jason Wilson, Dennis Erb Jr. and Steve Smith among those involved; Payne and Ellis retired. ... Michael Evans flipped his car in time trials at Cleveland but he appeared to be OK. ... Josh Henry won the Limited Late Model feature in a division that drew 44 entrants.