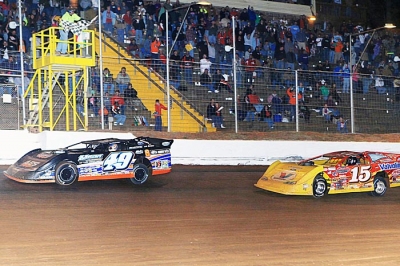 PHENIX CITY, Ala. (Nov. 13) — Jonathan Davenport may be one of the hottest Dirt Late Model drivers in the country with his impressive string of late-season victories, but he won Sunday evening at East Alabama Motor Speedway because he was cool under pressure.

Unfazed by Scott Bloomquist’s repeated challenges throughout the second half of the 37th annual National 100 feature, Davenport of Blairsville, Ga., turned back each of Bloomquist’s challenges and conserved his tires long enough to make the entire distance of the 100-lapper on his way to earning $24,950 for his second victory in the unsanctioned special event. | Notebook | Video | Slideshow

“I could hear him and I knew he was pretty close down there,” said Davenport, who earned the race’s $20,000 winner’s paycheck as well as $4,950 in bonus money for leading laps 2-100. “I slowed the pace down to where I thought I could make the 100 laps. I wasn’t sliding the car any or spinning the tires. I could’ve went faster, but I wasn’t taken a chance on burning the tire up. And I just knew he was gonna have to do something pretty special to be able to pass me.”

But Bloomquist, an eight-time National 100 winner, wasn’t special enough. Instead, the Dirt Late Model Hall of Famer from Mooresburg, Tenn., pressed the issue too much attempting to find a way around Davenport and the abuse to his right-rear tire ended up causing it to go flat with just three laps remaining in the race, relegating him to a 12th-place finish.

Bloomquist’s late flat gave defending race winner Steve Francis of Ashland, Ky., a shot at Davenport on the race’s final restart, but Davenport held him off to score his seventh victory in the past two months.

Behind Francis, Dale McDowell of Chickamauga, Ga., finished third while Dennis Erb Jr. of Carpentersville, Ill., advanced from ninth to fourth to score his seventh consecutive top -10 finish in the National 100. Tim McCreadie of Watertown, N.Y., finished fifth in his debut behind the wheel of Sanford Goddard’s Warrior Race Cars house car.

The victory capped off an impressive weekend for Davenport, who earned $5,000 earlier in the day for winning the event’s Crate Late Model feature. He also won the Zaxby’s Race of Champions at East Alabama Friday night and lowered the track record with his lap time of 13.50 seconds in earning fast time honors during Saturday night’s time trials.

If that’s not enough to prove the 28-year-old driver’s dominance at East Alabama, he also won the track’s other major Super Late Model event, the $10,000-to-win Alabama State Championship on Oct. 2. Sunday’s victory gives him his second sweep of the two late-season specials, a feat he also pulled off in 2009.

“It’s really just indescribable,” Davenport, the Barry Wright Race Cars house car driver, said of his success at the 3/8-mile oval. “Our cars are really good here. Barry he’s had really good success here no matter who’s in his cars. And I fell in love with this place the first time I made a lap around it. I’ve liked coming back ever since.”

McCreadie took the lead on the start from the outside of the front row, but it didn’t take the pole-starting Davenport very long to establish his dominance. He powered by McCreadie on lap two and quickly opened up a comfortable advantage as third-starting Bloomquist and fourth-starting Francis each also worked their way by McCreadie.

Davenport’s only serious challenge before the lap-50 mark came amid heavy traffic. Bloomquist was able to reel in the leader as he dealt with slower cars that were running two-and three-wide and even looked under Davenport at least twice. But each time the leaders got to clear racetrack, Davenport again opened up his lead.

Davenport’s dominance abated after a lap-50 restart as Bloomquist began to pick up the pace. Bloomquist never gave Davenport any space in the following laps, pulling under the high-running leader in nearly every corner. Bloomquist was mounting a serious late challenge before his tire let go as he crossed under the flag stand to complete lap 97.

“We knew going into it was going to probably be hard on tires, but I didn’t come here to run second,” said Bloomquist, the two-time Lucas Oil Late Model Dirt Series champion who hasn’t won at East Alabama since 2003. “If it was a points race, I would have finished second tonight, but I was here to win and that’s what I tried to do. We just came up a little short.”

Francis, who hasn’t won a race since winning the 2010 National 100, finished less than a car length off Davenport’s back bumper, but was never a serious threat to win. He faded more than a half-track behind Davenport and Bloomquist in a green-flag run from lap 50 to 75 and again faded far back before Bloomquist’s late flat.

Francis made a late bid to get by Davenport, looking low in turns three and four on the final lap, but fell short in settling for second.

“We went in tire-conservation mode about lap 60,” Francis said of his slower pace. “I figured somebody was gonna blow out (a tire late in the race) and hoped we had enough left. I hoped they got worn out where we could make a good run at ‘em.

“We made a run at Davenport there. If he’d entered (turn) three that last lap there as high as he did the lap before we might’ve had a shot him.”

McDowell, the 2006 National 100 winner, survived an early run-in with Mike Marlar of Winfield, Tenn., that sent Marlar off the backside of the racetrack. He then faded outside of the top five before the race's halfway point, but work his way forward and challenged Francis for the majority of the race's second half. He was happy to settle for the third-place finish.

“A top-five car is what we had and everybody lined up there and we went in tire-conservation mode those last 25 laps,” McDowell said. “We’re happy to bring a top three home. It’s fun to race with those guys. There was a great field of cars here.”

Davenport also used tire conservation to win the Crate Late Model feature. He took it easy while trailing polesitter William Thomas of Phenix City, throughout the majority of the race, and made a late charge to take the victory while Thomas faded.

Thomas bounced back from his disappointment in the Crate feature to win the $5,000 Limited Late Model feature later during the afternoon.