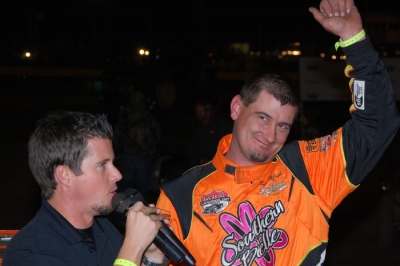 The pole-starting McCool celebrated in victory lane with a big hug for his mother and by giving his customized mohawk-topped helmet to a lucky young fan at the quarter-mile's oval's richest-ever event. | Notebook | Slideshow

Battling cars with a spec-engine package and taller spoilers, McCool's open-competition setup was successful as he avoided any problems with the high-side cushion exiting the corners throughout the race sanctioned by the Promoters Racing Organization Dirt Car Series.

"I about got over it that one time," McCool said, "and I just had to start hitting it a little easier and easier and hope we stayed on there."

Eric Cooley of Fulton, Miss., finished ninth to wrap up the PRO championship along with the Jeff Burns Racing Engines Rookie of the Year honors on the tour.

McCool and Ronny Lee Hollingsworth of Northport, Ala., started on the front row with McCool taking command early, but Hollingsworth got the worst of a lap-five restart when he spun, then retired from the race.

A series of early cautions slowed the action, but McCool held the top spot over Sullivan while the eighth-starting Pleasant headed for the front, reaching the third spot on the 11th lap.

McCool tangled with the slower Kyle Beard on the 13th lap, and Beard's spin brought out a caution as Sullivan, Pleasant, Timothy Culp and B.J. Robinson restarted behind McCool in a race that would go green the rest of the distance.

McCool quickly built a half-straightaway margin on Sullivan while Pleasant struggled after losing his brakes midway through the event. Wing was up to eighth after 30 laps and heading for the top five.

McCool stretched out to a straightaway lead and took the victory with Sullivan holding onto second at the finish.