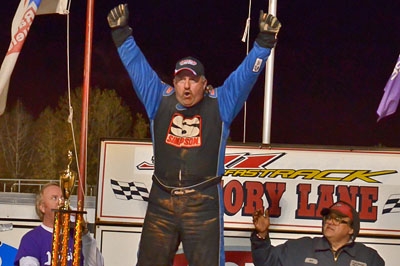 MADISON, N.C. (Oct. 29) — Ricky Weeks of Rutherfordton, N.C., pocketed $5,000 on Saturday at 311 Motor Speedway for his victory in the unsanctioned Spooktacular 50. Weeks took the checkers ahead of Mike Gault of Gaffney, S.C., for a victory in the finale at the half-mile oval. | Slideshow

Ferguson and fellow front-row starter Jeff Smith of Dallas, N.C., tangled on the start when Ferguson slipped high, and Smith ended up retiring on the second lap when he lost fuel pressure.

Ferguson dominated the first half of the race while 11th-starting Casey Roberts worked his way to the front as a series of cautions kept the field bunched.

Gault was the only driver to pressure Ferguson in the first half of the race, but Weeks took the second spot from Gault on a mid-race restart in turn one, pulled even with Ferguson in turn two and took command down the backstretch.

Weeks stayed in control the second half of the race to collect the victory.

Notes: Weeks drives a Rocket Chassis sponsored by Adams Electric, Parton Lumber and Starrette Trucking. ... Weeks previously won at 311 this seeason July 9 on the Carolina Clash Super Late Model Series. ... Justin Labonte ran in the top five early, as did Dustin Mitchell, who dropped out with a 21st-place finish. ... The most serious incident of the night came when Donald Bradsher clipped the inside berm, spun and collected Doug Sanders and Gary East; Bradsher recovered to finish eighth. ... Dennis Frankin's trailer hitch broke on the way to the race and he missed the race. ... Mitchell Coble won the night's feature for Fastrak-sanctioned Crate Late Models over Anthony Sanders and Dan Breuer, earning $3,000.