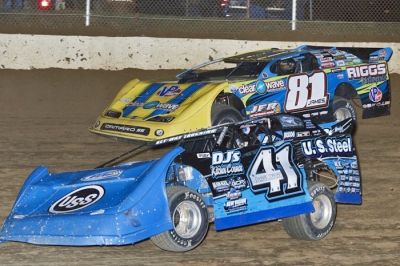 UNION, Ky. (Oct. 22) — Scott James of nearby Lawrenceburg, Ind., ended a successful season at Florence Speedway with his fourth victory at the half-mile oval Saturday, earning $5,000 in the season-ending Fall 50.

James overtook pole-starting Tyler Reddick of Corning, Calif., on a lap-29 restart and pulled away from runner-up Josh McGuire of Grayson, Ky., in the final laps at northern Kentucky racetrack. The 40-year-old driver credited his tire choice for helping his yellow No. 81 to victory lane. | Slideshow

“(Reddick) went with a softer combination than we did. We bolted on the hardest tire you can run here, the car was good all night," James said. "He was real good in the early going, but after that one restart, I think his tires started going away, we built up a good lead there and my guys in the infield were telling me to change my line because there was somebody gaining on me."

Kent Robinson of Bloomington, Ind., finished third behind James and McGuire while Eddie Carrier Jr. of Salt Rock, W.Va., rallied from his 19th starting spot to finish fourth. Greg Johnson of Bedford, Ind., rounded on the top five on a night when 37 Late Models entered the action.

The 15-year-old Reddick took the lead at the outset, opening up a wide gap and reaching lapped traffic after just seven circuits.

After a lap-10 caution for Cody Mahoney, Reddick pulled away again from James, Robinson, Johnson and hometown driver Darrell Lanigan before encountering heavy traffic on lap 19. Reddick maintained his margin maneuvering through the slower cars, including one nifty move to split a pair of backmarkers to increase his lead to a straightaway.

Reddick had a cushion of six lapped cars on the field when Frank Heckenast Jr. slowed to draw a caution after 28 laps.

That changed the race's complexion as James and Lanigan moved past Reddick on the restart. Two laps later Reddick hooked the inside berm in turn four and spun; he pulled to the infield.

After a lap-32 caution for a Mahoney-Jarrod Breeding tangle in turn one, Lanigan gave up the second spot and retired, leaving James and McGuire in the top two spots. James initially pulled away, but McGuire gained ground in the late stages. James changed his line over the final five laps to edge back away.