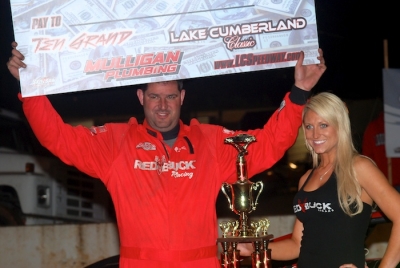 BURNSIDE, Ky. (Oct. 22) — When Dustin Neat visits Lake Cumberland Speedway, he's more accustomed to being collected in a wreck than collecting a checkered flag. But he turned all that around Saturday night at the Mac Metal-sponsored Lake Cumberland Classic.

"We've been snakebit at this racetrack and we don't run here a lot," said the 35-year-old Dunnville, Ky., driver, who started eighth in the 22-car field. "This one's on top, for sure. It's gotta be on top. No. 1, it's $10,000. No. 2, you come to a racetrack where you really don't have a lot of confidence in yourself or your stuff. That's just the nature of the beast because every time I come I tear up a race car."

It was O'Neal that came closer to tearing up a car when he briefly lost control exiting turn four, getting his right-rear corner into the wall before collecting his yellow No. 71. But by then Neat had driven his No. 25 past wasn't challenged the rest of the way despite a lap-86 caution that gave O'Neal a reprieve.

"We just didn't have the best car at the end," said O'Neal, the Martinsville, Ind., driver who started outside the front row one week after his $50,000 victory in the 31st annual U.S. Steel Dirt Track World Championship.

Victor Lee of Stanford, Ky., ran third most of the way but couldn't keep up with the frontrunners while pole-starting Justin Rattliff of Campbellsville, Ky., got fourth, regaining a spot from 13th-starting Jason Jameson of Lawrenceburg, Ind., in the final laps. Track champion Johnny Wheeler of Campbellsville, Ky., rallied from the tail to finish sixth, but he was a lap down at the finish after O'Neal's torrid pace for a 60-lap stretch mowed down the field.

O'Neal began rolling from the outset while Rattliff, Aaron Hatton, Lee and Neat mixed it up behind him in the early laps. Neat got up to second shortly after a lap-eight restart, but Lee regained the position on the next restart at lap 18 after Wheeler stopped in turn four.

Three quick yellows over the next four laps prevented anyone from building momentum, but when Hatton slowed after blowing a heat gasket on the 23rd lap, that set up a stretch of green-flag racing where O'Neal and Neat distanced themselves from the field.

"We started with a pretty good load of fuel (and) we were a little tight there early," Neat said. "As we got to going, the car just kept going and going and going. We had that long caution and I thought, 'Oh no, it'll take these tires a long time to fire.' They took off."

When O'Neal dispatched of Michael Asberry on the 54th lap, he'd lapped all but five competitors, and Neat was the only driver who could remotely stay in touch with the leader. O'Neal frequently had a cushion of two lapped cars, but Neat closed the margin by lap 62, and when the leader reached the fifth-running Jameson's machine on lap 73, Neat was all over O'Neal.

"I saw O'Neal was real good early. When we got to catching him there in the open racetrack, then we got in lapped traffic, I had to bite my tongue and make myself be patient. Because if you get into the corner (wrong) here, you can be junk in a heartbeat.

"I saw how (O'Neal) was getting into the corner in (turns) three and four and kind of set him up for the pass. I just tried to keep my car straight, drive it in (the corner) and drive across that bottom of the racetrack and get by him. He was kind of diamonding the racetrack off and he was sliding across the corner in that lapped traffic. So I thought if I could get under him, we could drive on by him. And there was a little strip of rubber he was missing about every lap, too."

O'Neal had a fast car, but it wasn't as fast as he'd have liked.

"Especially in (turns) three and four, I just felt like I struggled down there all night, and that's where he got around me," O'Neal said. "It's one of those things. The race car, at the start of the whole feature, we weren't as good as we should've been."

O'Neal followed Jameson for nearly 10 laps before his turn-four miscue opened the door for Neat.

"I just got in that lapped traffic and it was rough. Actually, once he got in front of me, he was better than I was. That's the bottom line: He had the better race car," O'Neal said. "Jameson, he was racing with somebody else there. It was one of them deals. We were all bunched up there, and I got a little high there and got crooked and the 25 car go underneath me. Hat's off to him. He did a great job."

A lap-86 caution flag slowed the race a final time when Jeff Watson and Dillan White tangled on the frontstretch, but Neat eased away without a challenge heading for the checkers.

"Even after that yellow gave us a shot (without) traffic, he was just better than we were."

"We were good. Our race car was good, my team's worked their butt off. They deserved this," Neat said. "Whew. I'm a little nervous, because it still hasn't sunk in yet. But it was great."

Notes: Neat's Longhorn Chassis is sponsored by Red Buck Cigars, NWN Distributing, Neat’s Service Center, Keltner Heat and Air, D&R Livestock and Tri-County Wood. ... The extra cash is going to help finance a trip to the World of Outlaws Late Model Series season finale at the Dirt Track at Charlotte (N.C.) for the winning team. "After this win we've got a little money to buy a few tires and get down there, so we're excited to go," Neat said. ... The victory was his fourth of the season. ... None of the six cautions were for serious incidents. ... Provisional starter Randy Ridner slowed in turn one on the 20th lap because he needed tearoffs for his faceshield on the dry-slick oval. ... A scramble on the 21st lap banged up several cars, with Rod Carter Jr., ending up against the backstretch wall. Jeff Watson's car appeared to suffered the most serious damage to the left-side sheetmetal of his No. 44. ... Watson was also part of the final caution on lap 86 in tangling with Dillan White. When Watson retaliated after the caution flew he was scored last in the 22-car field. ... Among drivers failing to make the feature: Tyrel Todd and Freddie Brock, along with Timmy Yeager and Jarryd Holshouser, who both scratched after entering Friday night's action. ... Skylar Marlar of Winfield, Tenn., drove Todd's backup MasterSbilt Race Car for the second time. He'd won in it a week earlier at Lake Cumberland.