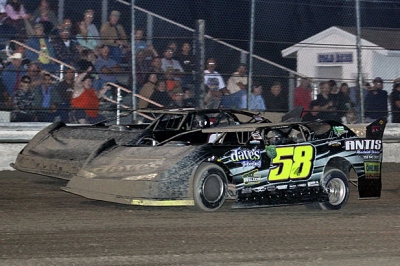 OCALA, Fla. (Oct. 15) – After battling back and forth with hometown driver Ivedent Lloyd Jr., Mark Whitener of Middleburg, Fla., took control for good when Lloyd had engine woes on lap 37 of Saturday night’s National Late Model Series event at Bubba Raceway Park and led the remaining distance for a $3,000 payday at the D-shaped 3/8-mile racetrack. | Slideshow

Whitener and Lloyd swapped the lead four times throughout the event. Whitener led the first five laps before Lloyd moved ahead. Whitener went back out front following a lap-12 restart. Lloyd appeared to be taking command after retaking the lead on lap 19, but his blown engine with three laps remaining gave the lead and the victory to Whitener.

Hometown driver Austin Kirkpatrick finished second in the 40-lapper ahead of Bo Allen of Bryceville, Fla., and Rich Pratt of Anthony, Fla., Tyler Ivey of Tallahassee, Fla., recovered to finish fifth after being involved in an early caution.

The race was slowed by multiple cautions, including an accident on a mid-race restart that saw David Clegg and Travis Carter both nearly go upside-down. Bregg’s race car ended up turned on its side.

Track owner Todd Clem, the nationally syndicated radio host known as Bubba the Love Sponge, competed in the event, scoring a ninth-place finish. He gave away his $400 winnings to a fan.