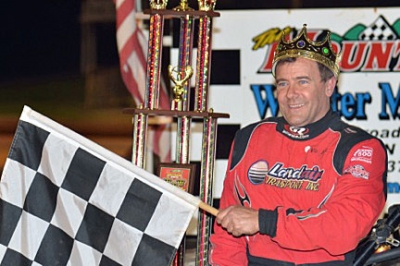 MARYVILLE, Tenn. (Oct. 15) – It had been three years since Vic Hill had last raced at the Smoky Mountain Speedway but on Saturday night in the Southern Regional Racing Series season finale, he looked as if he was at his home track. The Mosheim, Tenn., stated from the pole and led every lap of the Southern Regional Racing Series finale for a $3,000 victory at the 4/10-mile oval. | Video | Slideshow

“It’s great to be back here at Smoky Mountain,” Hill said after grabbing the first SRRS victory of his career. “It’s a big, fast race track and I damn sure like this kind of track.”

Hill shot to the lead on the start of the 35-lap race and was never seriously challenged. But behind the leader there was some intense racing. In particular, teammates Tommy Kerr of Maryville, Tenn., and Billy Ogle, Jr. of Knoxville, Tenn., spent at least 10 laps in the race’s early going disputing the third position. Finally, Ogle wrested the position away from Kerr on lap 15 and continued his march forward from his ninth starting place.

Ogle made his way to the second position with 15 laps remaining and looked to renew his battle from the previous night when he topped Hill in an SRRS event at Boyd’s Speedway in Ringgold Ga. However, Mark Douglas of Knoxville, suffered a problem on lap 23 while battling with Skip Arp of Georgetown, Tenn., for the third position. Race officials displayed the final yellow flag of the night when the Douglas came to a halt in turn four.

Ogle never got another shot at Hill as Arp used a good restart to overtake Ogle for the second position. The race ran caution-free from that point as Hill powered to a big lead and the eventual victory. Arp held Ogle off for the runner-up finish with Kerr and Chad Ogle of Sevierville, Tenn., rounding out the top five finishers.

After the race, a disappointed Ogle, Jr. lamented his lane choice on the final restart. “I wish I could’ve held on to second,” he said. “I chose the inside on the last restart and Skip got a good run on the outside.”

Josh Putnam’s ninth-place effort was good enough to secure the Killen, Ala., driver the SRRS championship.

Notes: Hill's Warrior has a Vic Hill Racing Engine and sponsorship from Landair Transport, Preferred Sandblasting and American Race Tires. ... Hill earned a $500 bonus for having the best average finish between Saturday’s race and Friday’s race at Boyd’s. ... Ogle earned a $300 bonus for having the second-best average. ... Super Late Models ran without roofs in both events. ... Greg Martin led all 30 laps of the night’s Crate Late Model feature, earning $2,000 for his second-consecutive victory at Smoky Mountain. His closest calls came in lapped traffic and only briefly after a couple of restarts.