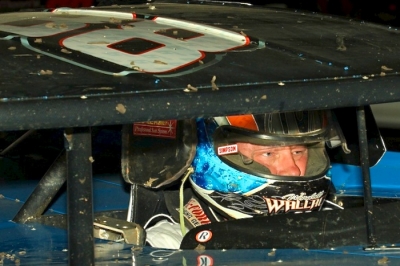 Wendell Wallace earned $2,000 in his first visit to Riverside in more than 20 years. (Woody Hampton)

Wallace took the lead from polesitter Dewayne Kiefer of St. Genevieve, Mo., on the fourth lap and raced to his second straight series victory and series-leading sixth of the season in taking the checkers ahead of 13th-starting Shane Harris of Sheridan, Ark.

Jamie Dacus of Lakeland, Tenn., was third followed by Kiefer and Clay Fisher of Dewitt, Ark. Provisional starter Brandon Smith of Floral, Ark., rallied from his last-row starting spot to finish eighth and wrap up the series championship.

The feature's first start was scratched when Jon Kirby got sideways in front of the field, triggering a six-car pileup and a red flag. Curtis Cook and Mike Carr were involved and done for the night.

Kiefer took command on the next start with Wallace and Todd Hall in pursuit. Hall grabbed the lead on the fourth lap, but a caution erased the move.

On the restart, Wallace used the high side to take the lead and crept away from the field at Kiefer and Hall battled behind him. Harris broke into the top five by the 10th laps.

Hall fell from contention with a lap-11 spin in turn one, and Wallace went back to work during a long green-flag run, a big lead erased when Kyle Beard blew a motor on lap 28 running third. Wallace cruised the rest of the way to the checkers.

Notes: Wallace’s Victory Circle Chassis is sponsored by Triple A Diesel Service and Wincrest Farms. ... Wallace has eight victories overall in 2011. ... Runner-up Shane Harris earned Larry Shaw Race Cars Hard Charger honors for gaining 11 spots. ... Mike Bilbro received a $600 bonus as the best finishing driver in a Crate Late Model. The bonus was posted by Huffman Motorsports, Matt Martin, Bobby Martin and Tri State Truck & Trailer Repair. ... Young Kentuckian Tanner English won a heat race over Wallace, but broke a rocker arm taking the checkers was the first retiree in the feature after being scheduled to start outside the front row. ... The late Terry Henson's family was on hand with his No. U2, giving his car a final lap at one of his favorite tracks. Henson died unexpectedly Sept. 22 at age 51. ... The third heat was delayed by a red-flag period of about two hours after Justin Glover's car got upside down in an accident, taking out a portion of the track's fencing and requiring extensive repairs. ... Among drivers failing to make the feature: Glover, T.J Hughes, Dillon Knight, Jeff Floyd, Shane Stephens and Billy Moyer Jr., who was coming off back-to-back Lucas Oil MLRA victories at Heartland Park Topeka in Kansas. ... Brandon Smith was forced to use a provisional starting spot and came from 19th to eighth. The performance secured him as the Comp Cams Super Dirt Series championship. Kyle Beard, Jon Mitchell, Jon Kirby and Curtis Cook rounded out the top five in series points.