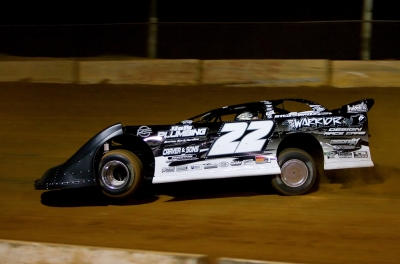 GAFFNEY, S.C. (Oct. 1) – With Saturday night’s 27th annual Stick Elliott Memorial, Cherokee Speedway celebrated the memory of one great racer and displayed the skills of another potential great one. Chris Ferguson of Mount Holly, N.C., commanded the Ultimate Super Late Model Series feature from the drop of the green, leading all 40 laps for a $4,000 victory. | Slideshow

Ferguson started on the front row alongside series point leader and event fast qualifier Chip Brindle of Chatsworth, Ga. An aggressive move on the first lap by Ferguson earned him the lead, and ultimately, the victory. With the win, Ferguson also moved into the series’ point lead.

“I knew we kinda got a good jump on Chip, I might have had about a nose (of the car) ahead of him at the flagstand,” Ferguson said afterwards. “Usually if you can pinch the corner, you can cut off about a car length or two coming off. I pulled up at the last second, just a little, going down the backstretch, and felt my back end pick up just a little bit. Then I knew (Brindle) was there. Then I immediately jerked back down.”

From that point on, it was all Ferguson. Brindle closed in to within a car length just past the halfway mark, but he suffered a mechanical failure on lap 26. With Brindle parked in the pits, Ferguson continued hitting his marks, never making a mistake en route to the win. At the stripe, his lead over second place Jeff Smith was about a straightaway. Rounding out the top five were Brent Dixon of Martin Ga., Jeff Cooke of Spartanburg, S.C., and Jay Sessoms of Stanley, N.C.

Next on the series schedule is the season-ending Blue Gray 100 at Cherokee on Nov. 19-20. With Ferguson, Casey Roberts, and Brindle all within five points of each another at the top of the standings, the traditional event now has an increased level of tension to add into the mix along with the $10,000 top prize.

Notes: Ferguson’s Warrior Race Car is powered by a Randy Clary Racing Engine with sponsorship from Starrette Trucking, Carver & Sons Roofing, Quality Landscape Materials, Creech’s DJ Service and Hal’s Plumbing. ... The victory is Ferguson’s first in a special event since the opener on the Carolina Clash Series at Carolina Speedway in Gastonia, N.C., in March.