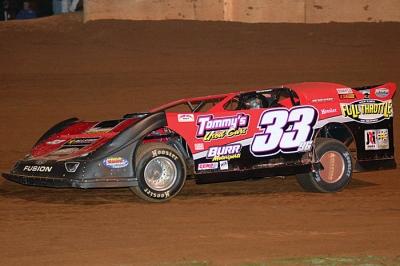 English started on the point and led every lap to collect $3,000 in the finale of the eight-race miniseries that was contested at three southern middle Tennessee tracks – Duck River, Winchester Speedway and Thunderhill Raceway. | Notebook | Slideshow

“The top was good for about five laps and then it would start to slow down a little bit,” said English, who was content to circle the hub of the quarter-mile oval until Miller began to show the nose of his car on the high side just past the midway mark.

After being tested by Miller with 13 laps remaining, English changed his line and was able to run comfortably to the checkers. He stayed in the bottom in turns one and two, but let his car run up to the cushion in turns three and four.

While he felt as though he needed to move up the track to break Miller’s momentum, he knew that he couldn’t leave the bottom completely unprotected. That’s where Morrow, of Cleveland, Tenn., was concentrating, so the thought of Morrow slipping by on the bottom was in the back of his mind.

“You never know what can happen,” added English. “I knew he was going to be there when I tried the top. It did help. After a few laps I got a little better.”

English was only threatened a few times and had to deal with only one lapped car in a race that had eight cautions, including five in the first six laps.

Miller of Lynchburg, Tenn., started third, but fell back to fifth on a lap six restart. He managed to work his way back to the leader by lap 25. One of only a handful of drivers trying to make the outside groove work throughout the race, Miller worked his way by Morrow on lap 23.

He tried English on the outside, but couldn’t make the pass. When English moved up the track, Miller gave the low line a try, but lost even more ground. He eventually slipped back to fourth behind Morrow and Charlotte, Tenn., driver Chuck Proctor. Miller’s effort was enough to wrap up the series championship.

Proctor started on the outside front row and never fell outside the top five.

Morrow, meanwhile, started fifth and was outstanding in recording his best-ever finish at Duck River Speedway in a rare trip there. He took a crack at English as well, closing in on the leader as the top four cars ran tightly together.

Morrow was devoted to running the bottom, however, and once English moved up the track, he had trouble staying with the leader.

“It was kinda dirty up there and I couldn’t really get up there with my spoiler,” said Morrow. “With that open motor (English) could really hammer that cushion. He did what he had to do to win the race. I felt like I did what I needed to do to try to win the race.”

Anthony Burroughs, of Russellville, Ala., rallied to a fifth-place finish after starting 14th.

Notes: English’s Burr Motorsports-prepared Barry Wright Race Car is powered by a Frank Ofria Race Engine and carries sponsorship from Full Throttle Race Parts, Renegade Racing Fuel, AAA Fence and Seay Motors. … The win was the 10th of the season for the 2002 UMP National Champion. … Miller had little trouble wrapping up the Tennessee Super Series championship. He earned $5,000 for the TSS title. … Despite the many cautions and high attrition rate, 16 cars were still running at the finish. And thanks to the timely cautions, 15 were still on the lead lap. … Kelly Hanvey, of Cullman, Ala., had a good night go bad when contact from Brad Skinner shot him up the track and into the car of Corey Posey. Hanvey, who had started 11th, went to the pits and returned to the track, but eventually dropped out and was credited with 22nd. The incident marked the start of an even worse night for Posey, who was involved in three separate cautions, the third of which came out when he made hard contact with the turn-one wall. … Brandon Kinzer, of Allen, Ky., won the previous Tennessee Super Series event on Sept. 3 at Winchester Speedway, but was never a factor in this race. … Anthony Burroughs drove the final 30 laps with his helmet’s visor up because it kept fogging up. After taking a minute to wipe the dust from his eyes following the race, he quickly sought some eye drops. … Boaz, Ala., native Tim Busha was running fifth when he tagged the turn three wall, ending his night. … It was the last race of the season at Duck River.