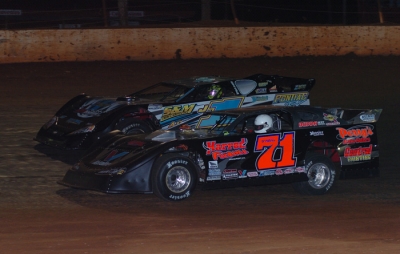 CLARKSVILLE, Tenn. (March 22) — Don O’Neal earned a seat on the throne at StormPay.com Speedway. And although he refused to be photographed sitting on the unique trophy at the fourth annual Tuckassee Toilet Bowl Classic, the Martinsville, Ind., driver still picked up $10,000 as he led all 50 laps from his pole position. | Post-race notebook | Slideshow | Pre-race notebook | Prelims

Only a brief bout with lapped traffic early in the race caused problems for O’Neal as he routinely pulled away to straightaway leads in a UMP-sanctioned race slowed by four cautions. O’Neal, a winner in the East Bay Raceway Park Winternationals opener at Florida Speedweeks, notched his second victory of the season in his Harrod Farms-owned Rayburn Race Car.

Wes Steidinger of Fairbury, Ill., started outside the front row but couldn’t keep up with O’Neal as Dennis Erb Jr. of Carpentersville, Ill., who finished with damage to the front of his car, stayed on Steidinger’s rear deck all race long. Steidinger finished more than a quarter-lap behind O’Neal in second, leading a nose-to-tail pack with Erb, Terry English of Benton, Ky., and Justin Rattliff of Campbellsville, Ky., rounding out the top five. Ohio’s Wayne Chinn rallied from his 17th starting spot to finish sixth on a chilly, blustery evening when temperatures dipped into the high 30s.

Third-starting Wendell Wallace of Batesville, Ark., who took second from Steidinger on the 19th lap, was closing on leader Don O’Neal on the 23rd lap when two backmarkers tangled exiting turn four and slid in Wallace’s path. Wallace’s white No. 88 bounded in the air after the contact and he came to an abrupt stop with heavy damage to the right side of his car.

Wallace’s tangle was the most serious incident. Jason McBride spun in turn one on the first lap to force a complete restart. Tim Tungate (15th starting spot), Jordan Bland (11th) and Jeff Walston (13th) pitted under caution, giving up their starting spots. The incident that involved Wallace slowed the action two laps before the halfway point.

Another caution appeared on the lap-23 restart when Steven Ashby and B.J. McCammon got together between turns one and two. McCammon, last week’s Clarksville, was part of the next yellow four laps later in nearly the same spot in a tangle with Caleb Ashby.

The final caution appeared on the 42nd lap when Brent Kreke slowed.

O'Neal dedicated the victory to former Northern Allstars Late Model Series and Vermilion County Speedway promoter Bill Nelson, who died last week. ... Mike Hammerle, who started Gary Johnson’s No. 20 after mechanical problems struck his No. 16H, pulled out on the seventh lap after using a provisional starting spot. Hammerle returned to the race later to turn several more laps. ... Tim Tungate was running near the tail when he got a flat right rear tire with five to go. He slowed but finished the race. ... Promoter William Scogin served in the flagstand because the track’s regular flagger, Randi Hesse, had left for vacation. She’s a former driver and has flagged at Clarksville the past few seasons. ... Carnell Parker III was running second in a consolation race, but he spun leader Jeff Walston on a restart and was sent to the tail. He pulled out of the race. ... The second consolation was plagued by a lengthy caution when the cars of Gil Smith and Jason Schmidt got hooked together in turn one. The cleanup delayed action nearly 20 minutes. ... Chris Shelton, the polesitter in the second consolation, got caught up in a first-lap wreck and was towed off the track. ... Among the preliminary features was a 20-lap race for four — four — mini sprints. Fortunately, there were only two cautions. ... Duane Hodges of Cunningham, Tenn., won the UMP-sanctioned crate Late Model feature by a quarter-track margin over Carnell Parker III. ... Tim Hancock edged former Late Model driver Randle Sweeney in the modified feature. ... Scogin announced next year’s March event would be made up of a pair of $5,000-to-win events with complete programs on both Friday and Saturday.