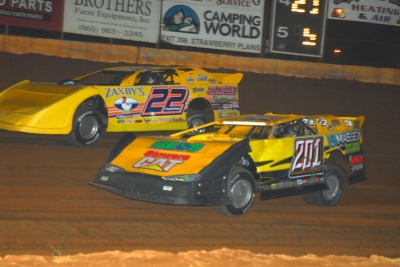 MARYVILLE, Tenn. (Sept. 24) — Billy Ogle Jr. of Knoxville, Tenn., used his team's home-track advantage at Smoky Mountain Speedway on Saturday to earn a $5,000 King of the Mountain victory and take over the lead on the Southern All Star Series.

Ogle's third series victory of the season gave him a two-point lead over Smoky Mountain runner-up William Thomas of Phenix City, Ala., heading into the SAS finale at Cleveland (Tenn.) Speedway on Nov. 19. | Video | Slideshow

At Smoky Mountain, Ogle rallied from his 10th starting spot, overtook Skip Arp of Georgetown, Tenn., on the 19th lap and led the rest of the way in his Blount Motorsports ride. Team owner Larry Garner, a part owner of the racetrack, has his race shop just a few miles from the 4/10-mile oval, so Ogle could enjoy a short ride back home with a trophy, a crown and the winner's check.

"I had a really dominant car. It makes my job easy when the car drives that good," Ogle said. "I could take it anywhere I wanted it — high or low. It's just such a good driving car right now I don't want to change nothing."

"The only thing I felt towards the end, I started hearing things. When you get toward the end, your mind will play tricks on you, and I thought I was losing a tire or something. But nothing was happening. That's just what happens when you get to the end of the race and you're leading — you start hearing things."

Behind Ogle and Thomas, Ogle's teammate Tommy Kerr of Maryville was third while Knoxville drivers Mark Vineyard and Mark Douglas rounded out the top five. Arp's No. 31, showing damage to the right rear corner, slowed just after Ogle took command.

At the start of the 50-lapper, Arp bolted into the lead with Douglas, Thomas and Matt Barrett giving chase. While Arp cruised through the first third of the event, the competition was intense from third through 10th with drivers jockeying for position.

Ogle began making progress in the inside groove, reaching third place by the 13th lap when he brushed past Thomas. He dispatched of Douglas two laps later immediately began closing the gap on Arp.

On the 19th lap, Ogle made a move under Arp for the lead as the two cars roared through turn two. Just as Ogle took the top spot, Arp’s car slowed dramatically with what appeared to be rear end damage after a brush with the outside wall. His race was over.

From that point Ogle was on cruise control, enduring a couple of restarts in the final 10 laps of the event.

Notes: Ogle's Blount Motorsports Rocket Chassis is sponsored by Massey Electric, Bearden Oil and Stowers CAT. ... Ogle entered the event two points behind Thomas but gained four points with the victory. ... Matt Barrett, a crew member for Eric Jacobsen, piloted Jacobsen's No. 5 and ran among the leaders early before falling from contention. ... Greg Martin, another Jacobsen crew member, led flag-to-flag in the Crate Late Model feature. ... The Crate feature had a scary moment when Jameson Settlemyre's car flipped and sailed wildly through the turn three fence, His car landed upside down completely outside the track, but he wasn't injured.