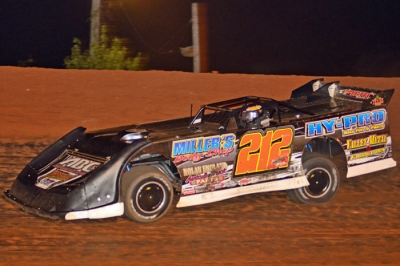 Josh Putnam heads for a $4,000 victory at Thunderhill. (photobyconnie.com)

SUMMERTOWN, Tenn. (Sept. 24) — Choosing the outside front-row starting spot, fast qualifier Josh Putnam of Killen, Ala., led all 40 laps of the Topless Brawl on Saturday at Thunderhill Speedway for a $4,000 victory in the unsanctioned special event. | Slideshow

Putnam stayed on point through three cautions, rarely facing a challenge at the high-banked track in maintaining a comfortable lead.