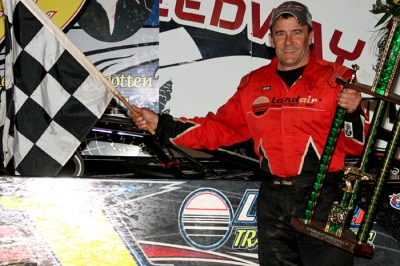 TAZEWELL, Tenn. (Sept. 23) — Vic Hill of Mosheim, Tenn., dominated all 44 laps of the Buddy Rogers Memorial at Tazewell Speedway on Friday for a $2,000 victory on the National All Star Racing Association. Hill notched his second NASRA victory of the season at the high-banked overall and third special event overall. | Video | Slideshow

"This Warrior Race Car this year, at this place in particular, has been great," Hill said in victory lane. "We actually threw a few little different things this time from the (Southern Nationals) race, and I think it was even better tonight."

Hill outjumped polesitter and new track-record holder Steve Smith of Powell, Tenn., on the first lap and avoided an problems in a race that saw two rollover accidents and a scramble that shook up the top five.

"I knew as fast as (Smith) was tonight, that if you let up any, he was going to be there to take the spot," Hill said. "In lapped traffic I was actually fortunate."

Smith's 10.828-second lap in time trials wasn't enough to save him from a turn-three spin on the 39th lap that knocked him out of the second spot. Smith collected top-five runners Jason Trammell and Terry Wolfenbarger while Bryan Hendrix slipped past to get the second spot, where he finished.

Smith recovered to finish third ahead of Bobby Wolter Jr. and Andy Galgoci in a race where eight cars were running at the finish.

The rollover accidents both came on the 11th lap. Hendrix and Tazewell's Limited Late Model champion Travis Fultz tangled on the backstretch, and Fultz banged off the outside wall, rolled and ended up perched atop the inside wall near the turn-three entrance. He walked away without injury. On the restart, NASRA champion Arnie Fields of Wallingford, Ky., got upside down in turn two, but he wasn't injured either.

Notes: Hill's Warrior has a Vic Hill Racing Engine and sponsorship from Landair Transport, Preferred Sandblasting and American Race Tires. ... Hill rebounded from a heat-race accident that ended his hopes two weeks earlier at Ohio's Eldora Speedway for the World 100. "Last time we had this car out it was at Eldora, and it was on its lid," he said. ... Travis Fultz was honored with his second straight Limited Late Model championship. ... The race closes NASRA's season. ... The event was a makeup from a Labor Day weekend rainout.