Roberts tops Bailes for $5,000 at Cherokee 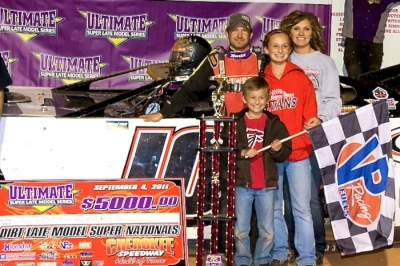 GAFFNEY, S.C. (Sept. 17) —Casey Roberts of Toccoa, Ga., outdueled polesitter Ross Bailes of Clover, S.C., early in Saturday night’s Ultimate Super Late Model Series event at Cherokee Speedway and pulled away in the second half of the 40-lapper on his way to posting his first series victory of the season. | Slideshow

Roberts, the four-time defending champion of the Southern All Star East Series that the Ultimate tour evolved from, earned $5,000 for his triumph.

Notes: Roberts’s Victory Circle by Moyer Race Car is sponsored by Cushman Paint and Body. ... The event was postponed from Sept. 4 due to rain. ... Saturday’s race was the tour’s third visit of the season to Cherokee. Jonathan Davenport and Brindle won the previous two events. ... The tour has two more events slated for Cherokee, including the $10,000-to-win finale on Nov. 20. ... The tour’s next race is Sept. 24 at Wythe Raceway in Rural Retreat, Va.