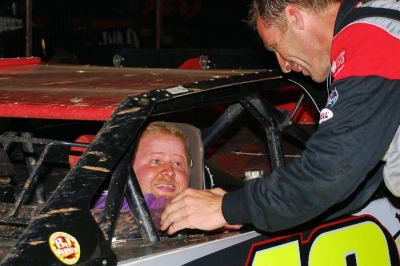 Morrow earned $1,000 apiece for the feature victories along with a $500 bonus for the sweep.

While Eric Jacobsen of Seacliff Beach, Calif., futilely chased Morrow for 60 laps, finishing second in all three features, he was also a big winner in narrowly ripping the VRS championship from Ross White of Knoxville, Tenn.

White entered the weekend with a 205-point lead on Jacobsen, but Jacobsen's Friday night victory at Boyd's Speedway, coupled with his three-runner-up finishes at Cleveland, left them in a tie atop the series points. Jacobsen won the tiebreaker with most victories to take the title from White, who was running in the top five in the first feature when he got into the backstretch wall.

White's team — along with help from Jacobsen's crew — worked to make repairs on White's car so he could return to action.

Notes: Morrow is sponsored by A&K Transport, Gravitt Roofing, James Mowery Motorsports, Cleveland Speedway and Tindell & Sons Carpet. ... Morrow drew a No. 2 invert for the second feature keeping him on the front row after a pole start in the first feature by virtue of his fast time. ... The third feature was lined up by combined finishes from the previous two features. ... Cleveland is dark until a weekly event on Oct. 15. ... The track hosts the $2,500-to-win Grant Adcox Memorial for Super Late Models on Oct. 22. ... The season ends Nov. 19 with the $5,000-to-win Gobbler Classic, the finale for the Southern All Stars.