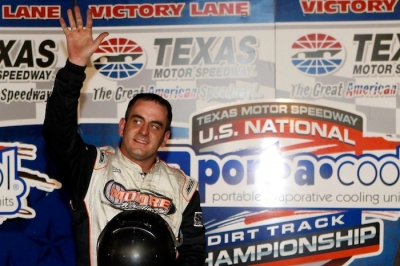 Moore pocketed $3,500 for his Port-A-Cool U.S. National Dirt Track Championship victory, his fifth of the season on the SUPR tour. He took the checkers 2.4 seconds ahead of polesitter Kevin Sitton of Baytown, Texas.

Series points leader Morgan Bagley of Longview, Texas, started third and ended up 11th in the 21-car field. He leads Culp by 171 points heading into the Oct. 1 series finale at 171 Speedway in Leesville, La.