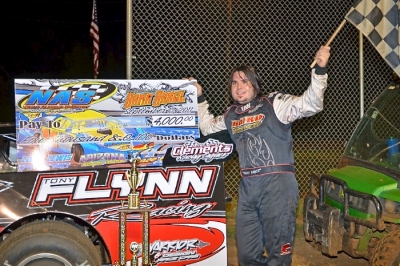 TUSCUMBIA, Ala. (Sept. 17) – Ronny Lee Hollingsworth of Northport, Ala., led every lap of Saturday night’s seventh annual Bama Brawl to earn a $4,000 victory in the unsanctioned special at North Alabama Speedway.

Josh Putnam of Killen, Ala., trailed Hollingsworth for the majority of the race. He briefly slid back to fourth when David Earl Gentry and David Breazeale moved by him midway through, but he moved back by both drivers a few laps later to secure the runner-up finish. | Slideshow

Gentry of Murfreesboro, Tenn., was third at the finish line, with Breazeale of Four Corners, Miss., fourth. Ross Campanovo of Clarksdale, Miss., rounded out the top five finishers.

Notes: Hollingsworth drives a Warrior Race Car for Flynn Motorsports with sponsored by Waddle Trucking and Kelley Electrical Contractors. ... Seventeen cars were running at the finish. ... The triumph is Hollingsworth’s third special event victory of 2011. He previously won a PRO Late Model Series event and a Mississippi State Championship Challenge Series event; both came at Whynot (Miss.) Motorsports Park. ... The event is the final special event on North Alabama’s 2011 schedule.