Jacobsen capitalizes on slipup to win at Boyd's 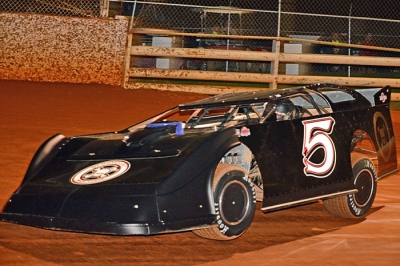 Jacobsen, taking command down the backstretch after Hickman got too high exiting turn two, earned $3,000 for the victory at the track straddling the Tennessee-Georgia border near Chattanooga.

Hickman, of Soddy Daisy, Tenn., settled for second after starting outside the front row with Chip Brindle of Chatsworth, Ga., in third. Tenth-starting David Payne of Murphy, N.C., and 12th-starting Tim Busha of Boaz, Ala., rounded out the top five.

Fast qualifier and polesitter Josh Putnam of Killen, Ala., who lowered the track record with his 13.010-second qualifying lap at the third-mile oval, ran second before departing with engine problems near the halfway point of the 40-lapper. Series points leader Ross White of Knoxville, Tenn., finished 17th after dropping out on lap 25.

Hickman darted into the early lead with Putnam and Jacobsen giving chase as the frontrunners battled through traffic in the first half of the race. Putnam's car showed smoke before the halfway point, and he coasted to the infield on the 21st lap as Jacobsen inherited the second spot.

Hickman stayed in command and led the field on the lap-26 restart, but three laps later, Hickman's slipup allowed Jacobsen to make the winning move.

The last of three cautions appeared on lap 31 when fourth-running Jacob Grizzle stopped on the track, and Jacobsen held on the rest of the way.