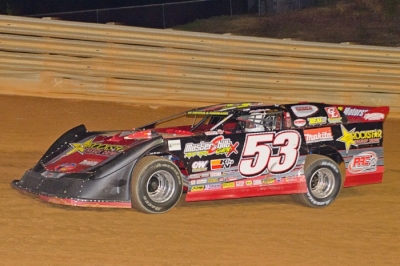 Cook, of Brasstown, N.C., set fast time at Volunteer Speedway and led all 60 laps of the Tennessee vs. Carolina Brawl for a $5,000 payday in a Countdown to the Cup history for the tour's playoff-style system that decides its series champion. | Video | Slideshow

Ross Bailes of Clover, S.C., posted a runner-up finisher at the 4/10-mile oval while Jonathan Davenport of Blairsville, Ga., was third. Chad Ogle of Sevierville, Tenn., and 15-year-old Zach Mitchell of Woodruff, S.C., rounded out the top five finishers.

Cook bolted out of the gate at drop of the green, taking the lead over Mitchell, Bailes, Mark Douglas and Davenport. With Cook setting a blistering pace, the first caution waved on lap eight when series points leader Luke Roffers and Jay Sessoms tangled on the front straightaway about the start-finish line and spun down against the inside wall.

On the restart, Cook once again began to put some distance between himself and his closest challengers. He caught the tail of the field and was working lapped traffic on lap 20, easily maneuvering through the backmarkers.

Another caution appeared when Jeff Maupin and Dustin Mitchell tangled on lap 23, and Douglas was out three laps later when he hit the wall between turns one and two, knocking him out of the fourth spot. Another yellow appeared on lap 29 for Travis Yow's spin.

Cook brought the field back up to speed and Davenport was glued to his rear bumper. But Cook edged away again, leaving Davenport and Bailes to battle for second.

With no cautions in the second half of the race, Cook continued to build on his advantage. His only tense moments came amid lapped traffic about lap 50, allowing Davenport and Bailes to close within four lengths.

But Cook cleared the slower cars and pulled away for the victory while Bailes outdueled Davenport for the runner-up spot in the final laps.

Notes: Cook's MasterSbilt Race Car has a Race Engine Design powerplant and sponsorship from Rockstar Energy Drink, Makita Industrial Power Tools and Hicks & Ingle. .... Carolina Clash rookie points leader Chad Paxton of Troutman, N.C., crashed in turn three in hot laps and was taken to a nearby hospital with a possibly broken wrist. ... Jerry Broyles and Dale Ball split Volunteer's twin 20-lap features for Fastrak-sanctioned Crate Late Models. ... Next up on the Carolina Clash Countdown to the Cup is a $4,000-to-win on Sept. 17 at Wythe Raceway in Rural Retreat, Va.