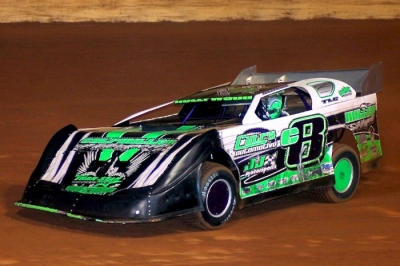 KILGORE, Texas (Sept. 10) – After taking charge early, Timothy Culp of West Monroe, La., continued his winning ways on the O'Reilly Southern United Professional Racing tour Saturday night at Lonestar Speedway. The fourth-starting Culp was on cruise control most of the way, leading 35 of 40 laps at the 3/8-mile speedway in east Texas and collected a $2,500 payday in topping series points leader Morgan Bagley of Longview, Texas, by five lengths.

With the victory, Culp shaved another five points off of Bagley's lead in SUPR's title chase. Culp has been as close as 15 points earlier in the season to Bagley, but the margin currently stands at 210 with races dwindling down. The pair of rookies both left their modified backgrounds behind in the wake of sensational first years in the Late Model division.

Bagley, who started alongside Culp in the second row, got one last crack at the lead when a late race caution appeared. But Culp defended his ground in a six-lap sprint to the finish, forcing Bagley to settle for the runner-up finish. Two-time series champion, Rob Litton of Alexandria, La., claimed third, while Robbie Starnes of Baytown, Tex., finished fourth after leading the race’s first four laps. Seventh-starting Chris Holley of Dayton, Tex., rounded out the top five finishers.

The pole-starting Starnes jumped to the lead on the initial lap with Litton, Culp, Bagley and Jeff Chanler trailing. Culp wasted no time in getting by Litton two laps later for second, then placing the target squarely on leader Starnes, who fell victim to Culp on lap 5.

Bagley began his move forward move when he overtook defending series champion Rob Litton for third on lap 11. As the race wore on, limited movement throughout the top five or six positions occurred.

Just before the halfway mark, Culp approached lap traffic and kept a one-car cushion on himself and Starnes. Culp increased that by another on lap 27, making two lapped cars sandwiched between him and the runner-up position.

Bagley grabbed second from Starnes and focused on reeling in Culp, eliminating the two -car cushion that stood between them. Bagley began to see the daylight with ten to go and a clear shot at the leader.

Starnes would feel pressure for third by Litton. Litton would work on Starnes and seize the spot just before the caution for fifth-running Jeff Chanler lap 34. The late caution would give the opportunity for the top two drivers in the series to duke it out for the last six remaining laps.
Culp wouldn't be denied and took his third series win in the last eight SUPR events, ignited a challenge down the homestretch, from now to the end of the season.

Notes: Culp's Trak-Star Race Car is powered by a Wall 2 Wall Performance Engine and sponsored by Miller Motorsports, PRP Racing Suspensions, Beau Taylor Technologies, Culp's Automotive, J&J Motorsports, Graduate Sales and BA Motorsports. ... Culp registered his 16th top-five finish this season in 34 events, including four wins at Greenville Speedway, Devil's Bowl, 171 Speedway & Lonestar Speedway. ... Culp and his Miller Motorsports team plan to add a new Warrior Race Car to their shop soon. The 21-year old Culp said the team will most likely debut the beginning of next season. ... The main event had ten cars running at the finish, featured two lead changes and was slowed by a single caution. ... Bagley and his race team had to evacuate their east Texas shop due to area wildfires. The team successfully moved from the area unscathed and has since returned after control was restored. ... Allen Tippen of Minden, La., earned the race’s hard-charger award with his run from 11th-to-sixth. ... Patrik Daniel of Wills Point, Texas, was a late arrival. He missed heat racing action and advanced from the tail of the field to eighth in the feature. ... Montgomery, Texas, driver Ray Allen Kulhanek, a Sprint Car regular, got behind the wheel of a Dirt Late Model for his first time in the event. The 29-year old finished 10th in the main event. ... The tour makes its next stop at Texas Motor Speedway Dirt Track on Sept. 17th, for the U.S. National Dirt Track Championship.