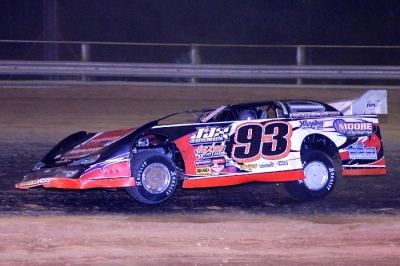 The polesitting Moore grabbed his fourth SUPR victory of the season in taking the checkers five lengths ahead of Ronny Adams of Diana, Texas.

Moore credited his starting spot in large part for his victory.

The race got off to a shaky start, as the yellow immediately waved before one lap could be completed. Timothy Culp of West Monroe, La., and Allen Tippen of Minden, La., made contact between turns one and two, forcing a restart.

A successful start saw Moore taking the point over Adams, Chanler, Darin Patrick and Kennith Crowe. The feature stayed green seven laps as Patrick overtook Chanler to steal a spot before the next caution. A slowed Kyle Pleasant brought out a yellow.

Another yellow appeared a lap later when Culp and Bagley got together in turn two, with both becoming entangled momentarily by the front bars.

When the race resumed, Moore again paced the field and approached traffic on lap 13. The leader carefully negotiated lapped cars as Adams drew closer for the lead one lap later. With Adams bearing down, Moore continued to lead the way Wesley Chanler slowed to draw a yellow.

Moore's excellent restart had Adams and Jeff Chanler shuffling for the runner up position. Just past the halfway mark, Adams averted a near spin, saving his No. 1a car in turn four.

At lap 26, most of the pack was hugging the bottom groove while the feature clicked off its longest green flag run. Moore built better than a four-second advantage on Adams, Chanler, Holley and Patrick.

With 10 laps remaining, Moore was coasting until a lap-35 yellow appeared.

Adams didn't let Moore get away on the restart, but he wasn't able to make a pass for the lead.

"Every time we had a caution and got out of lapped traffic, Adams was never really a threat to us," Moore said. "If I wanted to pick the pace up and move on, we was always able to do that. My crew guys was able to signal that to me and we would have a good lead when we would get on out there"

Notes: Moore's MB2 Customs Chassis is powered by a Jay Dickens Racing Engine and sponsored by Moore Wireline Inc, tic Tools International, X-Treme Graphics, Mars Race Cars, J&J Motorsports and Smith's Towing. ... Moore has 18 career SUPR victories, tied for eighth all-time with Ricky Ingalls. ... Moore scored his 10th victory in only 28 starts overall. ... The 30-minute feature, slowed by six cautions, ended at 11:40 p.m. ... B.J. Robinson of Shreveport, La., had an eventful night in his newly wrapped red and yellow Childress Racing No. R5. It started with a black flag in the heat race, when Robinson clipped Chris Holley from behind, spinning him out to warrant a caution. After more tight racing he was sent off the track. In the consolation, Robinson lost a left-front wheel before a lap could be completed. He finished 15th in the main event after starting with a series provisional. ... Brooks Strength of Byram, Miss., a four-time winner this season at Jackson (Miss.) Speedway, made his first series start. He dropped out of the feature to finish 20th. ... Chris Buhler of Central, La., had a short evening, losing an engine in hot laps. .... Modified driver Kyle Pleasant of Natchitoches, La., entered the Late Model ranks for the first time in his career in an Allen Lenard-owned Warrior Race Car. He was the feature's first retiree. ... Another driver testing Late Model waters was Bud Mullins, son of long-time SUPR regular Bubba Mullins. The younger Mullins made his first series start but pulled off in 21st. ... Drivers failing to make the feature: Buhler, Gary Christian, Shawn O'Toole, Mark Underwood Jr. and Drew Zeigler.