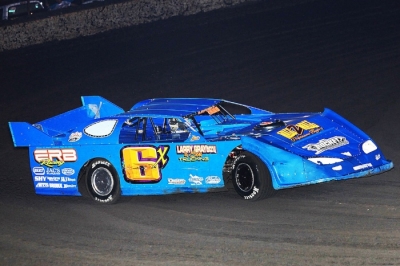 Rob Litton gets rolling at Battleground, where he notched his 24th career SUPR victory. (ronskinnerphotos.com)

"We were having carburetor problems through the whole feature and we almost actually spun out a couple times because it died, then when it would pick back up, it broke the tires loose," Litton said. "I quit matting the throttle and then it pushed out a few times, because it was stumbling and dying so bad."

Adams, who started third and led the first 17 laps, settled for second with front-row starter Doug Begnaud of Cypress, Texas, in third for his best series run of the season before hopping a plane to Ecuador on business. Allen Tippen of Minden, La., was fourth while impressive series points leader Morgan Bagley of Longview, Texas, came from his 13th starting spot to round out the top five.

At the drop of the green flag, Adams, Begnaud and Robbie Stuart battled down the backstretch with Adams taking the early lead ahead of Stuart, Timothy Culp, Begnaud and Litton.

Litton took positions from Begnaud and Culp to get into third after four laps, and two laps later Litton took second from Stuart and began tracking the leading Adams.

A flat tire for sixth-running Robbie Starnes bunched the field with a lap-11 yellow, and after another quick caution, Litton went back to work on Adams. Stuart hit the cushion on lap 16 to try and regain second from Litton, but the low-running Litton not only fought off the move, but he grabbed the lead from Adams a lap later.

Litton dodged a spinning Zach McMillan for a yellow, then another caution appeared on lap 29 just after Chris Holley squeezed into second in his newly-wrapped No. 28.

While Litton edged way, Holley, Begnaud and Adams battled it out behind him — Stuart faded because of a faulty wheel bearing. The pursuers fell further behind in the late laps as Litton wrapped up his 24th career SUPR victory.

Notes: Litton's Rocket Race Car is powered by Wall 2 Wall Performance Engines and sponsored by LMS Truck Center, Litton Motorsports, Larry Grayson & Son Trucking, TWM Racing Products, Stuckey Enterprises Racing and Erb Racing. ... Litton ranks sixth all-time on SUPR's win list, behind Kenny Merchant, Doug Ingalls, David Ashley, Ronny Adams and Ronnie Poche. ... The 25-minute feature ended at midnight after four cautions. ... Six cars finished on the lead lap. ... Patrik Daniel was running sixth when he ran out of fuel in the final laps; he dropped out in 12th. ... Robbie Stuart's team made an engine swap Saturday afternoon. ... Chris Holley of Dayton, Texas, recovered from a heat race accident to make a 15th-to-sixth run in the feature. ... Timothy Culp of West Monroe, La., dropped out when his radiator got into the fan. ... Lee Davis of Greenwood, La., made a rare series appearance and battle a popping noise in his powerplant during prelims; the team changed the battery before the feature. ... Marlon Wild of Springfield, La., had a broken lifter that ended his night early. ... Steven Whiteaker Jr. of Corpus Christi, Texas, took the Gary Rollo-owned No. 17 to a seventh-place finish. ... SUPR's Labor Day weekend Sept. 2-4 is made up of trips to USA Speedway in Sterlington, La., Greenville (Miss.) Speedway and Champion Park Speedway near Haughton, La. ... Morgan Bagley will go for his fourth straight series victory at USA Speedway.