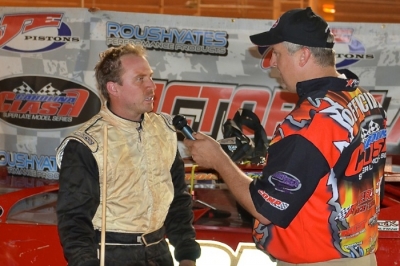 Luke Roffers talks about his victory at Friendship. (Gary Laster)

ELKIN, N.C. (Aug. 20) — Polesitter Luke Roffers of Concord, N.C., led all 40 laps Saturday at Friendship Motor Speedway to grab a victory in the opening round of the Chase for the Championship on the Carolina Clash Super Late Model Series. | Slideshow

Roffers earned $4,000 in winning the first of five events in the playoff-style showdown, sponsored by JE Pistons and Roush Yates Performance Parts. He notched his fourth series victory of the season and fifth of his career.