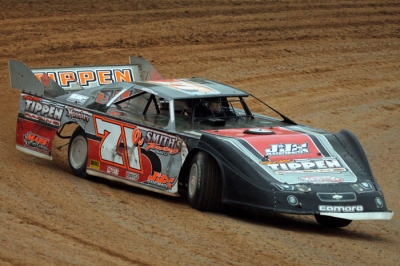 Allen Tippen tunes up before his victory in Chatham, La. (glennonphotos.com)

Tippen, who entered the race with eight top-five finishes including a streak of three straight runner-up finishes in July, grabbed the seventh SUPR victory of his career and first since March 2009 at Champion Park Speedway. He took the checkers three lengths ahead of Timothy Culp of West Monroe, La. | SUPR notebook | Slideshow

"I knew (the track surface) was going to latch up and I knew that tires were going to be a game, whoever could keep the tires underneath the car," Tippen said. "We went with a hard tire, I believe most everybody did tonight. I knew that was going to be the ticket, so if I could just stay out front, save my tires early in case I really needed to run it harder at the end — that was our gameplan coming into the feature.

"And I had to run it hard at the end, because they put a little pressure on me. It seemed to work out, and this couldn't have came at a better time since that drought we have had since my last win at Champion in '09. I thought I had forgot had to get to victory lane, but we have been close with those second-places in a row this year. We hit a little bit of bad luck, but it all turned around for us tonight."

Culp, who got the second spot with 14 laps remaining, chased Tippen home with a second-place finish in the caution-filled feature. Ray Moore of Haughton, La., was third followed by 12th-starting Troy Berdan of Minden, La., who had been out several weeks. Nicholas Brown of Hodge, La., rounded out the top five.

Tippen jumped to the lead at the outset over Bubba Mullins, Culp, Rob Litton and series points leader Morgan Bagley, and it took just 10 laps to reach backmarkers. Culp and Litton positions several times before a lap-13 caution slowed the action. The first yellow involved all the frontrunners except Tippen with Bagley getting the worst end of the it and restarting on the tail.

With Tippen in command, Litton and Culp continued battling before the sixth-starting Moore worked into contention, grabbing the second spot and looking underneath Tippen on the 19th lap.

The tussle for the top spot continued past the midway point with Tippen and Moore leading a five-car breakaway that included Ronny Adams, Litton and Culp.

On lap 31, impatience coupled with aggressive driving triggered three yellows among the frontrunners, including when Culp got too hot under Litton on a restart in an accident that eliminated Adams and forced Litton to restart on the tail.

Tippen had a three-length edge with 15 laps remaining while Culp slipped by Moore to take second a lap later. A lap-42 caution for Jim Bryant's stalled car gave Culp a shot at Tippen, but a good restart and steady driving over the final laps kept Tippen out front.

Notes: Tippen's MasterSbilt by Mars is powered by a Jay Dickens Racing Engine and sponsored by Smith's Towing, J&J Motorsports, Troy's Auto Salvage & Metal Recycling, Hayco Transport, Troy Tippen Racing, Hoosier Racing Tires, Mars Race Cars and X-Treme Graphics. ... Tippen gained 46 points on series leader Morgan Bagley but remains third in the chase behind Bagley and Timothy Culp. ... Tippen's only previous victory in Chatham came in June 2006. ... Eight cautions slowed a feature that began at 10:50 p.m. ... A dozen cars finished on the lead lap. ... Troy Berdan's 12th-to-fourth run gave him hard charger honors. ... Former track champion Nicholas Brown returned from a vacation in Panama City, Fla., to finish fifth; he managed his second top-five finish of the season despite his involvement in a lap-13 yellow. ... A faulty radiator hampered Gary Christian, who dropped out in 20th. ... Next up for SUPR is an Aug. 27 visit to Battleground Speedway in Highlands, Texas. The 3/8-mile track is hosting its first series event in 13 seasons.