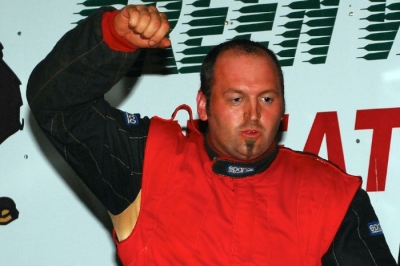 GLENCOE, Ala. (Aug. 19) — Fresh off his first Super Late Model victory, Jason Hiett of Lincoln, Ala., added another one Friday at Green Valley Speedway with a $2,000 triumph on the PRO Dirt Car Series.

In a race with a shuffle among the leaders in the late stages, Hiett led the final six laps at the 3/8-mile oval to take the checkers, his second victory in seven days. His first came Saturday in weekly competition at Talladega Short Track, when he led the final two laps. | Slideshow

William Thomas of Phenix City, Ala., who led a single lap before Hiett took command, settled for second with Eric Cooley of Fulton, Miss., in third. Home-state drivers Tim Busha of Boaz and Robert Gant of Flat Rock rounded out the top five in the first of two Bama Blowout races on the weekend. The Promoters Racing Organization tour moves to Talladega for a $2,000-to-win event on Saturday.

Tony Knowles of Tyrone, Ga., got the jump on polesitter Ronny Lee Hollingsworth of Northport, Ala., early in the 40-lap feature, while Hollingsworth ended up spinning on lap 10 while running second.

Knowles was in command until he pulled off the track on lap 34, handing the lead to Thomas. Hiett overtook Thomas on the 35th lap and led the rest of the way.

The most serious caution came on the fourth lap for a multi-car pileup in turn four after contact between Busha and Bo Shirley knocked some top drivers out of contention, including Josh Putnam, Lee Sutton and Brian Reese.