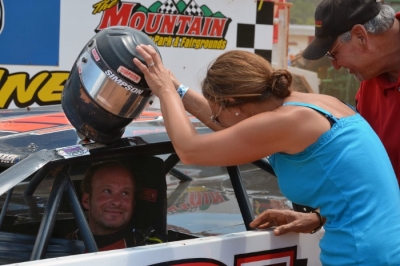 Although it took four attempts to get the race going, once it did Roberts led all the way, fending off occasional challenges from runner-up Billy Ogle Jr. of Knoxville, Tenn., for a 35-lap victory in a race postponed by Saturday night rain.

Skip Arp of Georgetown, Tenn., was third with hometown driver Tommy Kerr and Mike Weeks of Friendsville, Tenn., rounding out the top finishers as 20 of the original 24 drivers returned for Sunday's makeup.

The first attempted start was called back when Roberts jumped. On the second attempt, polesitter and fast qualifier Austin Dillon of Welcome, N.C., got into the turn-one wall, causing enough damage to the right front of his car to end his race before a single lap was complete.

The next start saw hometown driver Bobby Giffin get into the wall at the same spot as Dillon, except the results were more serious. Giffin's car took a wild ride, spinning and flipping before coming to rest atop the wall. His race was over.

The fourth start finally stuck and Roberts took command, leading all the way in a race slowed by just one more caution when Sammie Russell got into the turn-four wall.

Notes: Roberts drives a Victory Circle Chassis sponsored by Cushman Paint and Body. ... The previous special event victory for Roberts came July 19 at East Alabama Motor Speedway for the Schaeffer Oil Southern Nationals. ... Initially there were plans for a hot-lap session on Sunday, but with more rain potentially threatening, the feature was called to the track for immediate racing. ... The next SRRS event is listed as Oct. 1 at Toccoa (Ga.) Speedway, but that track has halted weekly racing and its unclear what special events it will host this fall.