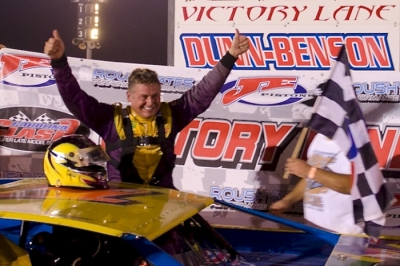 The 45-year-old Autry, who took the lead from Dustin Mitchell on the 10th lap, fought off challenges from five-time series champion Ricky Weeks of Rutherfordton, N.C., for the victory. A turn-four accident after the white flag appeared forced a final restart, but Autry won the one-lap dash to wrap up a $4,000 victory at the Shirley Autry Memorial. | Autry ends skid | Slideshow

The winner's father, Donald Autry, and Shirley Autry promoted the racetrack for eight years in the 1980s. She died in January 2010.

The caution-plagued event tested Autry's patience, but he maintained his focus for his first series victory since 2003.

"I said calm down and drive this thing like you know how to do it. And I reckon for a moment, for a reason we're here tonight, everything just worked out," Autry said. "My daddy asked me a couple of weeks ago, 'Son, if you don't do nothing else for me, try to win that race coming up.' I said, 'You aren't putting the pressure on me, are you?' I thought it about it two or three times. Boy, it's been so long since I won, that would be such a present."

Weeks tried to make his car work in the high groove, but he couldn't get off the corners well enough to overtake Autry.