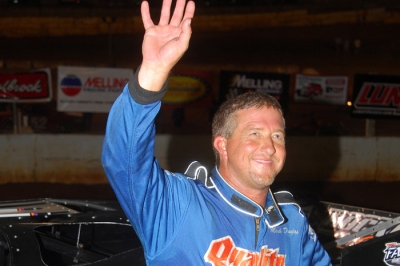 Douglas kept runner-up Vic Hill of Mosheim, Tenn., in check in the second half of the race in securing the victory. Eric Jacobsen of Seacliff Beach, Calif., was third followed by Chad Ogle of Sevierville, Tenn., and Ross White of Knoxville, Tenn.

Among cautions was for a slowing Kerry Jones on the second lap and for Jeff Maupin on lap 36 when he jumped the cushion between turns one and two, making slight contact with the wall and setting up a four-lap dash to the checkers.

Douglas had a couple of scares. With 11 laps remaining, the slower car of John Tweed briefly got out of shape in front of the leader in turn four, and Hill nearly pulled alongside the lead on the next lap. Then just before the lap-36 caution, it appeared Hill had a great opportunity to make a pass exiting turn two, but the yellow flag erased the move and reset the field with Douglas out front.