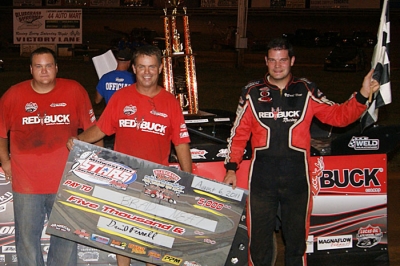 BARDSTOWN, Ky. (Aug. 6) — Brad Neat of Dunnville, Ky., pulled away from a duel with his older brother for a $5,000 victory in the 13th annual Bluegrass 50. Neat's victory was his first on the first-year STARS Midwest Dirt Racing League and second in one of Bluegrass Speedway's annual events.

Dustin Neat led at the outset, pacing the field 12 laps before the fourth-starting Brad Neat took the point. Dustin edged back ahead to lead lap 14, but Brad went back out front exiting turn four on the 15th lap and began stretching his advantage.

The winner built leads of more than a half-straightaway in controlling the rest of the 50-lapper at the half-mile oval.

Notes: Brad Neat's Bobby Labonte Motorsports Longhorn Chassis is powered by a Cornett Race Engine and sponsored by Red Buck Cigars, Neat's Service Center and Tarter Farm & Ranch. ... Mike Jewell of Scottsburg, Ind., tangled with Eric Wells and Tanner English on a lap-19 restart, but Jewell managed to work his way back to ninth with English just behind him. ... Among drivers failing to make the main event: Daniel Hatcher, Zak Blackwood, Scotty Earl and Timmy Yeager. ... MDRL competitors take a break before a Sept. 3 event at Richmond (Ky.) Raceway paying $3,000 to the winner.